Motorcycles Walt And Dan Mahony: The Unsung Heroes of Flat Track RacingThese legends of the flat track were not racers, but put themselves in as much risk to seal these moments in time.

Before television coverage, streaming, and social media, a still photograph was the only way to tell the story of racing. A single photograph could get the racers laughing over near misses and reliving the best pass on the slippery outside line. Newspapers and magazines were paramount to sharing the tall tales that promoters would spin to fill the stands for the next night’s races. The history of racing is something of a blend of the visual and the fantastic, and up until recently, it was told by only a few visual voices. One of the families synonymous with flat track racing photographs — and keeping racing history alive — is the father and son team of Walt and Dan Mahony.

(1) Dan desrcibed the hardest part of being the trackside photographer as seeing his friends get hurt or killed during a race.

A notorious jack-of-all-trades photographer with a love of motorsport, Walt Mahony once attempted racing himself. After a brief union dispute with his employer over the broken leg sustained in that one and only race, Walt received what would amount to a disability check. And, just like any good gearhead would, he took that money and partnered up to lease the 37 acres of land that would become LA Speedway and subsequently, the legendary Ascot Park. With his partners and friends, he bought, borrowed, and stole enough to build a nearly half-mile dirt oval for motorcycle and car racing.

The senior Mahony was not to manage the track for long. Through a series of mishaps and negotiations, the famed Agajanian family became the proprietors of the racetrack in 1958, while Walt took to working as the official track photographer, photographing the nightly car and motorcycle races. He sponsored racers himself, sold prints to all of the pros, and perhaps without understanding the gravity of the time, captured a golden era of motorcycle racing. The best in the sport’s history — Leonard, Nixon, Resweber, Brelsford, Mulder, Hateley, Lawwill, Aldana, Roberts — all relied on photos from Walt for sponsorships and memories. Every Friday night, Walt could be seen on the infield, getting the best shots for the racers, the fans, and the magazines. Before long, Walt had wrangled his teenage son, Dan, into the mix as well.

The father and son duo took small roles in movies, such as Ron Howard’s first film, Grand Theft Auto, and also photographed behind the scenes of an Evel Knievel film.

Dan was just an infant when he first attended Ascot. He watched his father use his Rolleiflex trackside, and before long, he was carrying a 35-millimeter Nikkormat SLR of his own. By the late ’60s, Dan was tall enough to pass for 18, and they became a shooting team, working opposing corners of the track every night. While Ascot remained Dan’s favorite track to watch and work, he began traveling with the racers to all of the Grand National races across the country, while Walt maintained his residence at Ascot.

A Los Angeles landmark, Ascot attracted the elite of sport and screen. No sooner had Dan taken up the profession with his father than Bruce Brown’s cameras came to the track to capture the action for On Any Sunday, following Dan to the sweet spots for action at Ascot. The father and son duo took small roles in movies, such as Ron Howard’s first film, Grand Theft Auto, and also photographed behind the scenes of an Evel Knievel film.

As new ventures came to Walt, such as the purchase of the Trackmaster Racing Frames business, Dan continued on as Ascot’s main photographer.

Walt and Dan captured the visual history of dirt track motorcycle racing from the 1950s until the end of Ascot’s land lease in 1990. It was a screeching halt for racing in Los Angeles; the end had begun. Car and motorcycle racing in California was slowing down, and the Mahony family left the San Fernando Valley for the Midwest, where land was cheap and racing was plentiful.

Shortly before his death in 2002, Walt had accumulated nearly 425,000 trackside images and had been inducted into the AMA Hall of Fame. Dan continued to photograph at the races until a final trackside injury took the enthusiasm out of racing. Dan took to managing the family collection of images, offering 8×10 prints to fans of the sport for nominal prices, just like the good old days.

(7) Unknown rider getting roosted after a crash, Hopetown Grand Prix.

It was the sale of the prints themselves that gave the collection its depth and wide recognition, and it is ultimately how the collection survives to this day. In November 2015, a mouse chewed some wiring in the Mahony home, and a fast-moving fire ensued, leveling the home and their collection of photographs and memorabilia even before the fire department arrived on the scene. The devastating loss still saddens Dan, but the sharing of images between racers and fans online brings him some relief. The collection is vast, each image carrying an anecdote or backstory that Dan readily shares with a sober laugh about times gone by. If the Mahony story teaches us anything, it is that by sharing our visual memories of these moments, we can keep the history behind them alive far beyond the life of the negative. 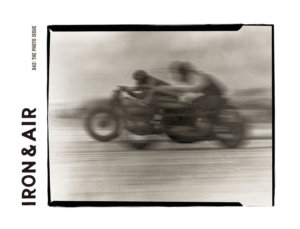