Motorcycles Pre-Unit Perfection: A Triumph Bobber from ChoppaheadJay Medieros and Truth from Choppahead Kustom Cycles reveal what it takes to produce one of their stunning customs. 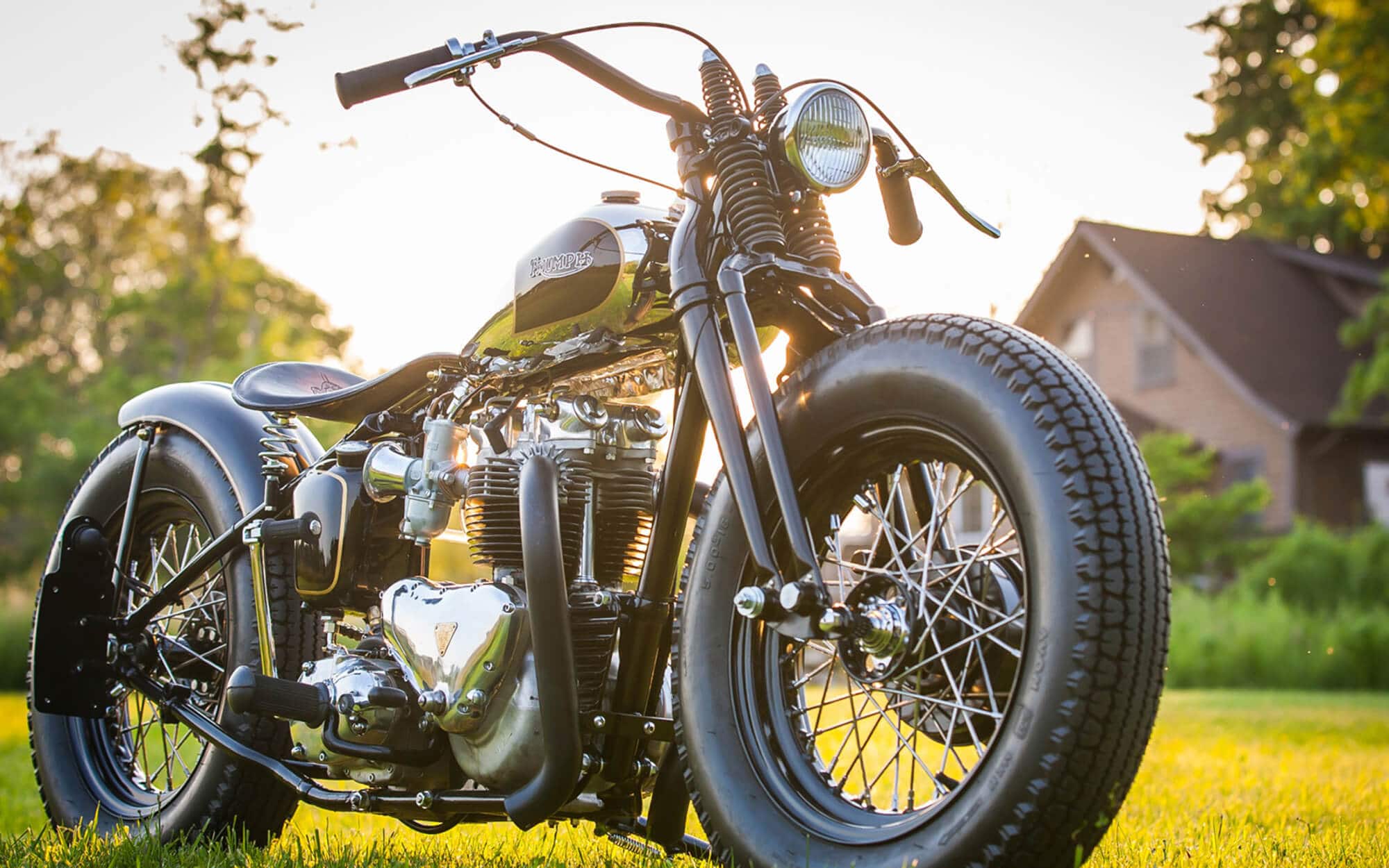 East coast build shop Choppahead has been rolling out undeniable classics — beautiful and expertly-built vintage Triumphs — for nearly two decades. We sat down with Jay Medieros and Truth to show us what it takes to produce one of their stunning customs.

Iron & Air: What was the inspiration for the project?

Jay: For years, Choppahead has been known for building our “classic” style build. We have been itching to break the barrier into pre-unit builds. We also love older bikes from the ’30s and ’40s, the period where custom bikes didn’t exist because they were already so damn cool. So our inspiration here was to take a ’40s Triumph and a ’40s Harley and combine the best of them to make our own special blend of bike.

Truth: Our inspiration and motivation is to build classic, timeless, and clean motorcycles. Customer desire also feeds into it, but usually, our customers come to us because we are on the same wavelength.

What were some of the biggest challenges to overcome?

Jay: The bike is relatively simple, as we are known for. So our biggest challenges were grafting the stock ’50s rigid to a stock ’50s swing arm style frame, and having the right clearance and alignment in the rear wheel.

Truth: There are challenges with every build that are unique to that bike. We haven’t had any mind-numbing major challenges with this build — we’ve been at this for a while. As far as fabrication goes, splitting the modern Paughco tank to make it look like old split tanks was time-consuming! On the mechanical side, the magneto was a source of frustration — I’m sure Jay will have something more to say about that! But overall, the biggest challenge is to build a custom bike that still looks like it could have rolled off the factory floor decades ago. Heavy customization that looks subtle. 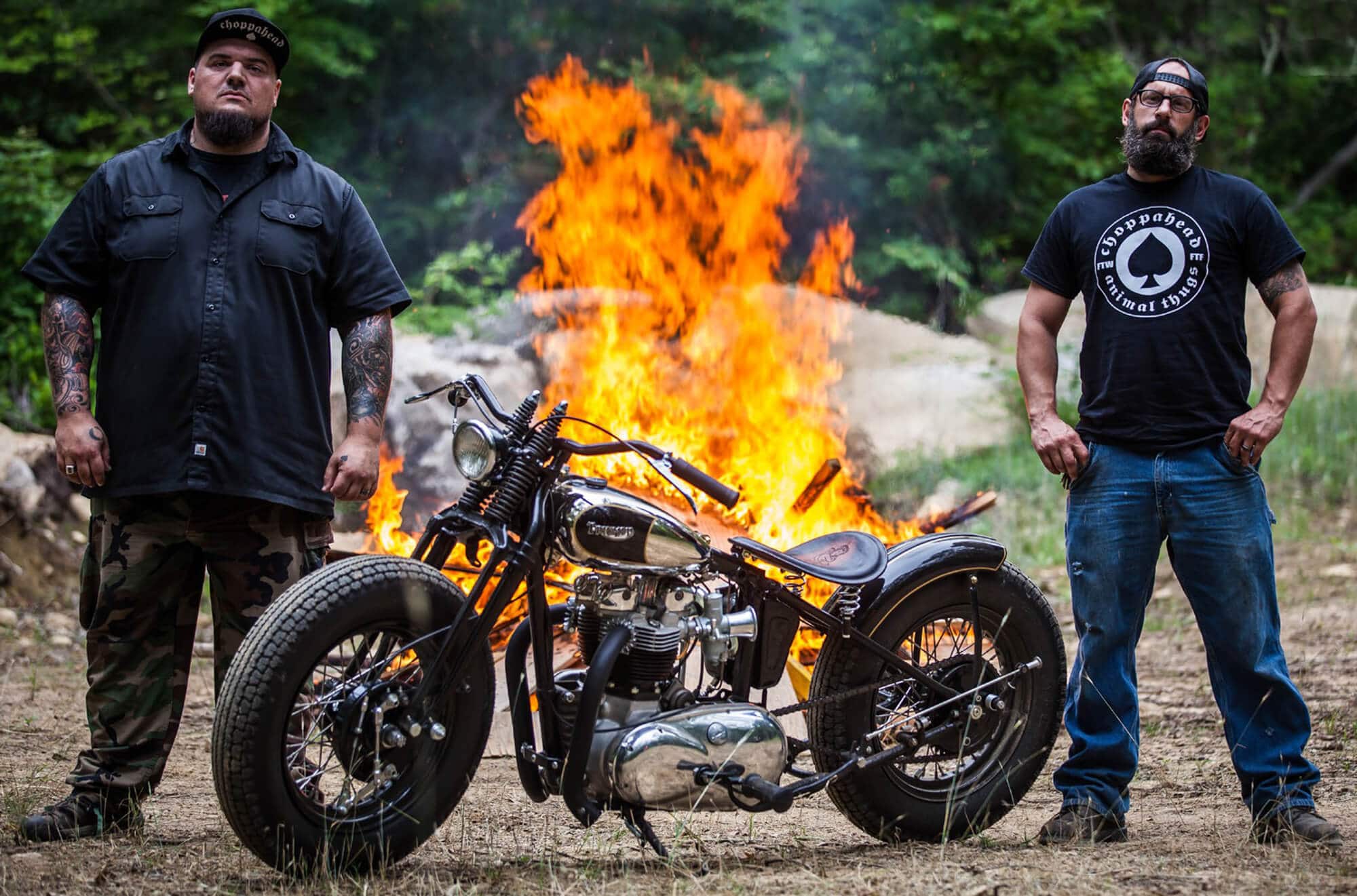 What are the creative and engineering highlights you feel make this build special?

Jay: The major highlight of this bike is that it almost seems like it could have been a factory bike from the early ’40s, and not so much a chopper.

Truth: I kind of hit on that in the last question, but the goal was to build a sick custom that retains a classic styling and spirit. I think that shines through on this bike, and makes it one of our favorite builds.

Can you share the alterations in stock versus custom fabrication?

Truth: We always use a blend of stock parts and custom fabrication. That’s the secret to the formula. That’s a stock pre-unit frame, a stock pre-unit rear fender half, a stock Triumph rear wheel, and obviously, a Triumph engine. We used that as the basis and did our thing around it. With a classic sensibility, of course. 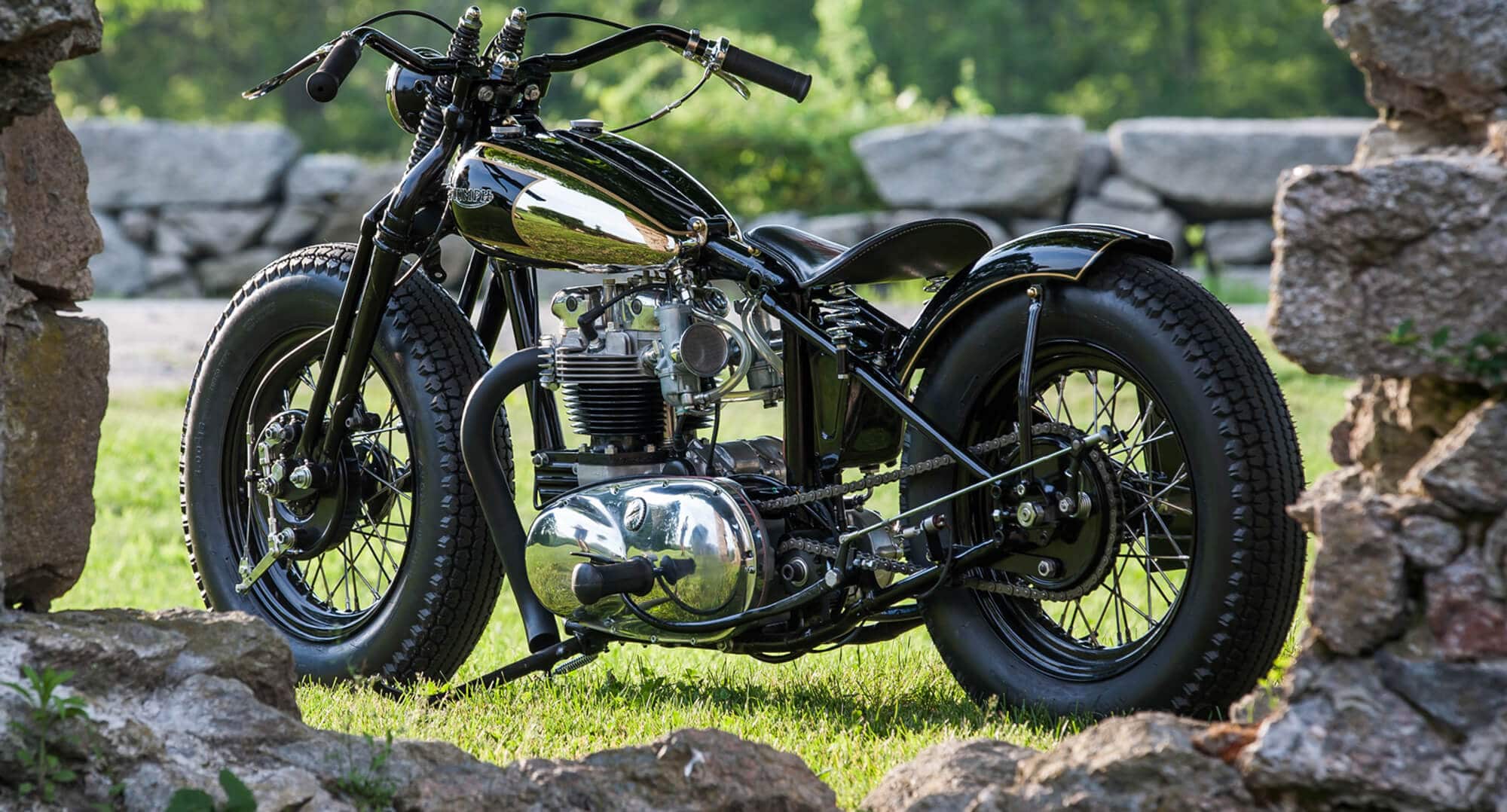 Explain the difference between unit Triumphs and pre-unit models?

What was the total build time on this bike?

Jay: We actually started planning for this build over a year and a half ago. But since we were building it for a good friend and wanted to raise the bar, we weren’t in a rush to get it done. Once we really got in the swing of things, it took about six months. 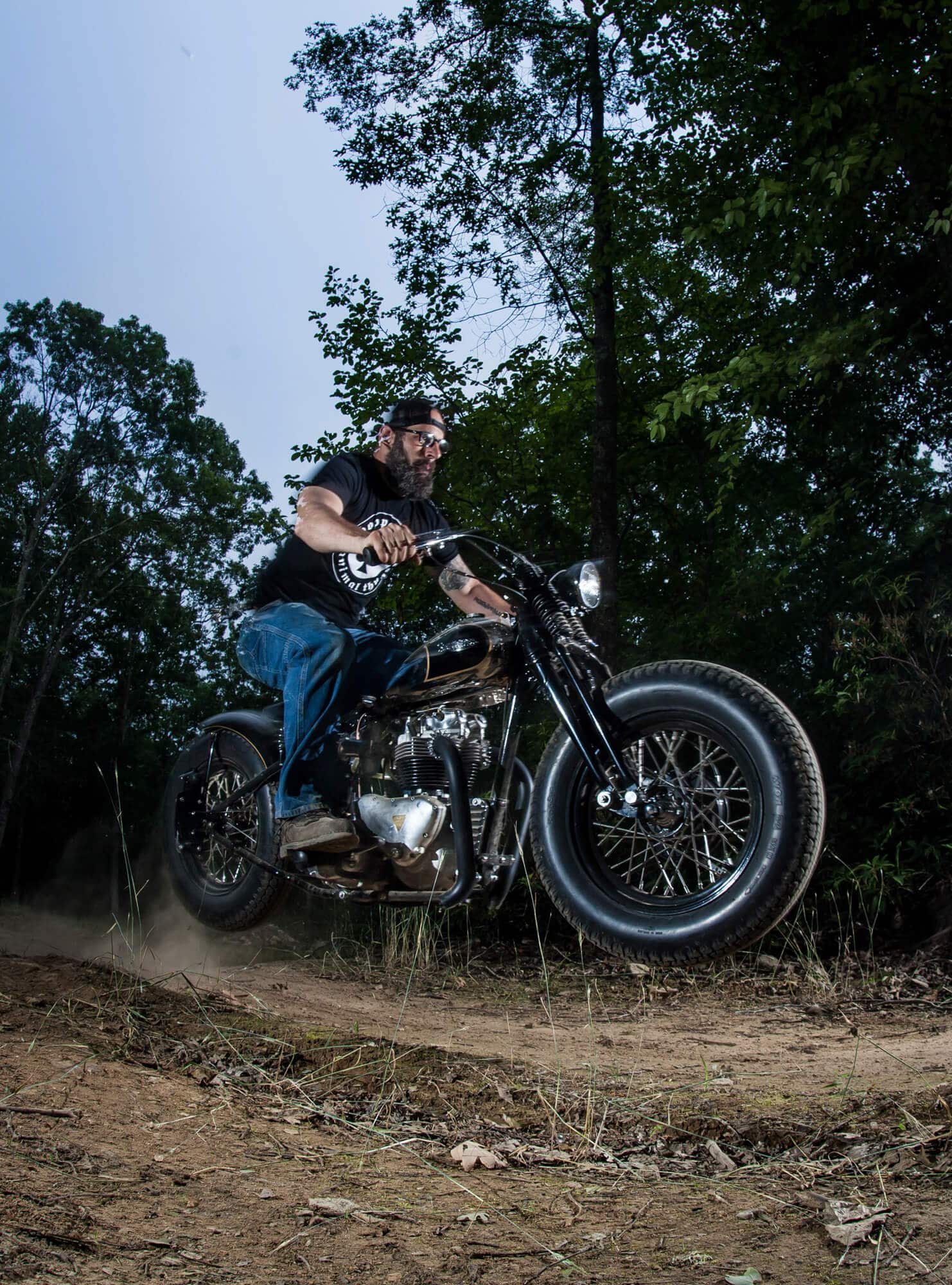 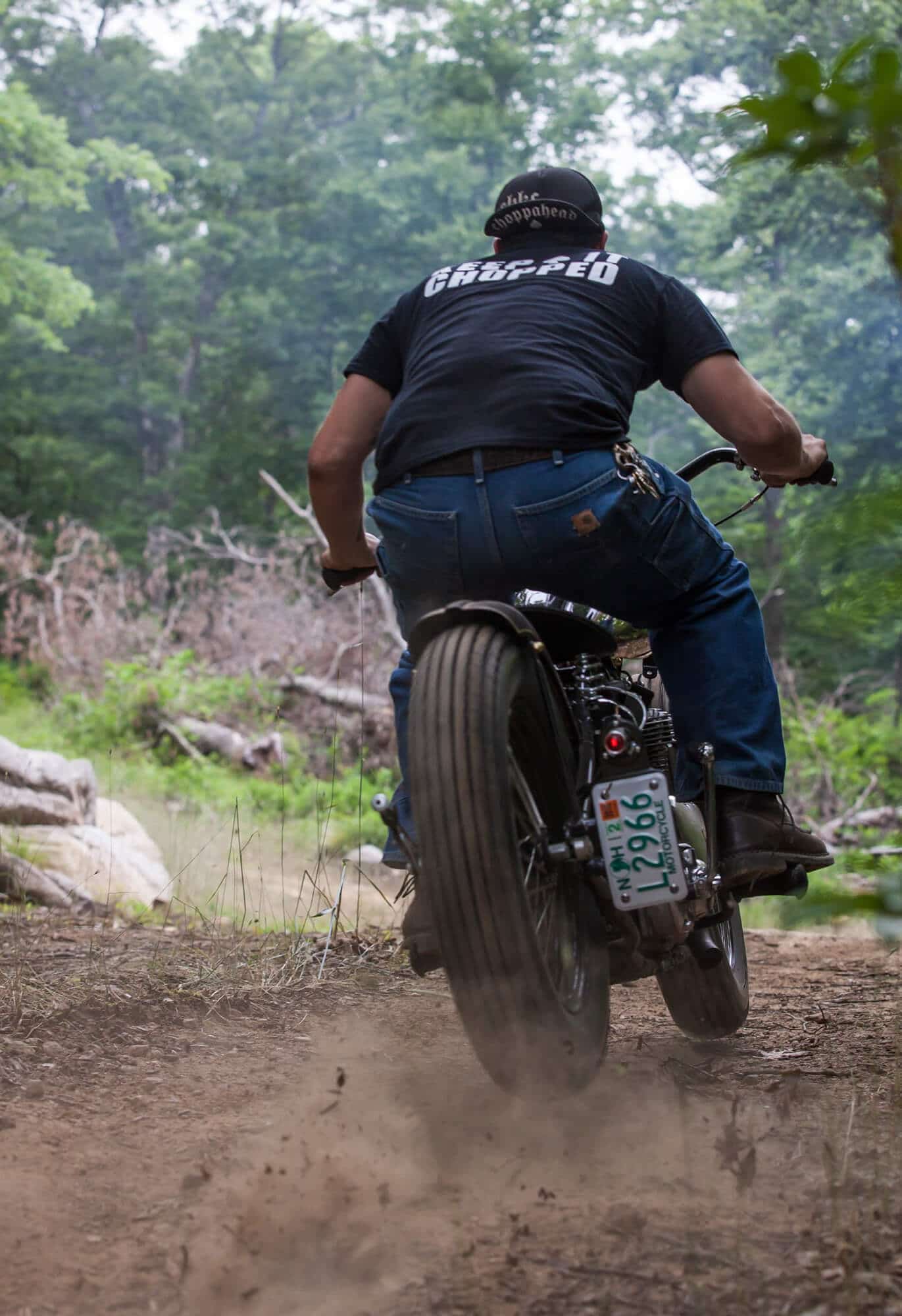 How much of this is a labor of love versus profit potential?

Jay: Anyone who has a shop building old Triumphs knows its a labor of love. Not many people understand the hit we take on a full build. But you know if you were standing by someone who was getting paid for a week of work and you said, “Sorry, you didn’t earn that this week,” and then tore up the check, you bet your ass they’d have a new understanding of the value of these builds.

Where are you originally from and how did you end up where you are now?

Jay: Truth and I are originally from the New Bedford area. We were both living in Boston and started the shop in our friend’s garage. Through a bunch of years of moving, and three different shops, we were able to scrape up enough money to buy the shop we are in now.

Truth: I grew up in an atmosphere of Do-It-Yourself. This was the logical progression of that. Also, my father used to have old BSA’s and was always flipping cars when I was a kid, that is fused into this somewhere as well.

Jay: Truth and I started building bikes in 2001. I started by rebuilding a bike my dad built in 1976, and Truth started by building his “chobber” that became the basis of the Choppahead classic build.

Truth: Jay had acquired and rebuilt his Dad’s old Triumph (which he still rides to this day – it’s fucking awesome), and I scored my first Triumph. It was a ’64 and was a retard machine – raked, stretched, unrideable if you knew any better. Soon after that, I started Choppahead and built my ’67 CHOBBA Triumph, which was kind of the prototype for our classic style of build. Jay and I, at that point, had the bug hard and we partnered up and built the Slayer bike, which really nailed our classic style. It was the first official CHKC build and took first place at Vintage Laconia that year. This is when purists really hated customs. We knew we were on to something at that point. 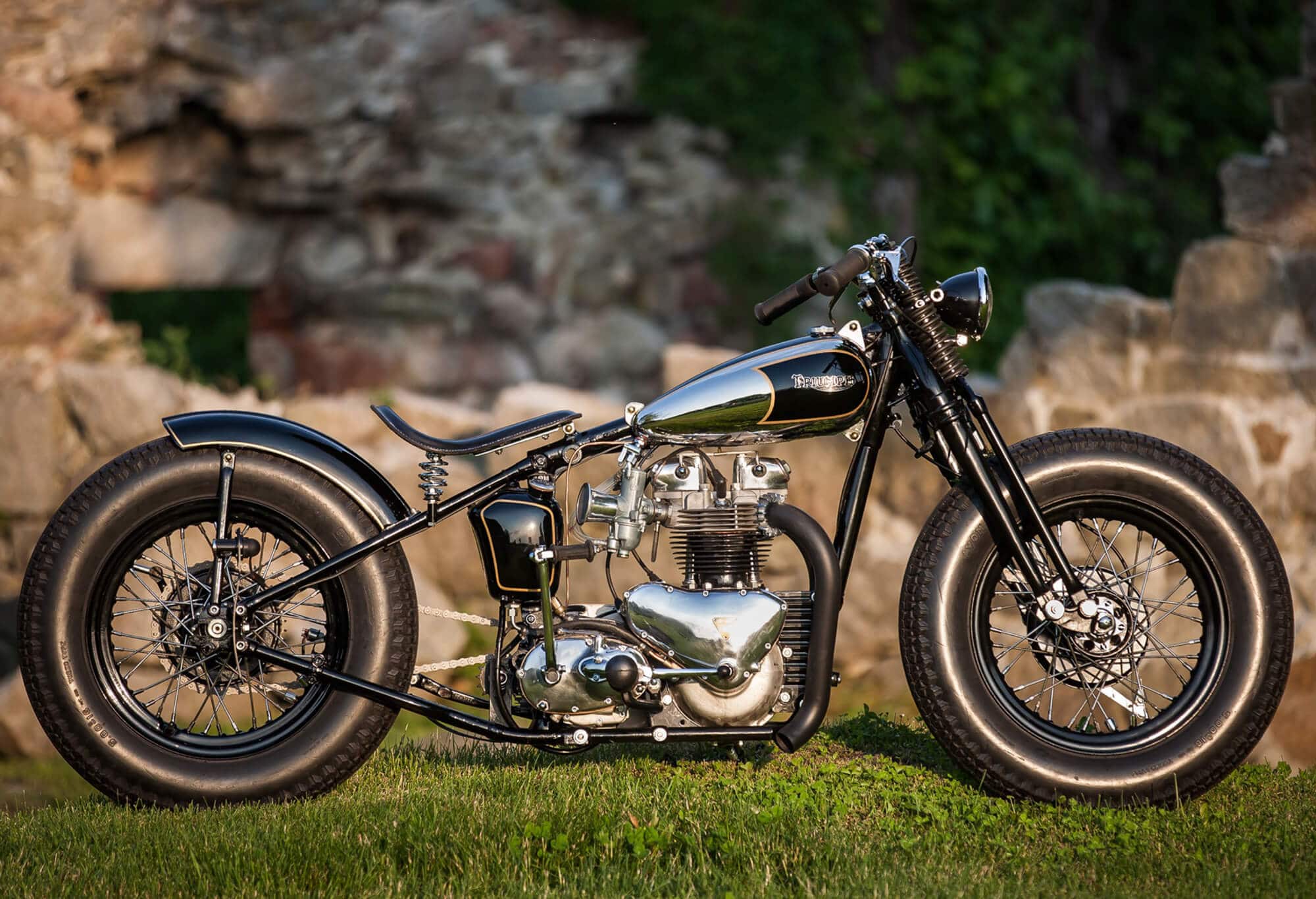 Are there any words of wisdom you’d like to pass along to new builders?

Jay: The only way to be successful is to create your image, stand by your image, and understand the culture. Don’t be afraid to work yourself to your limits and hustle. 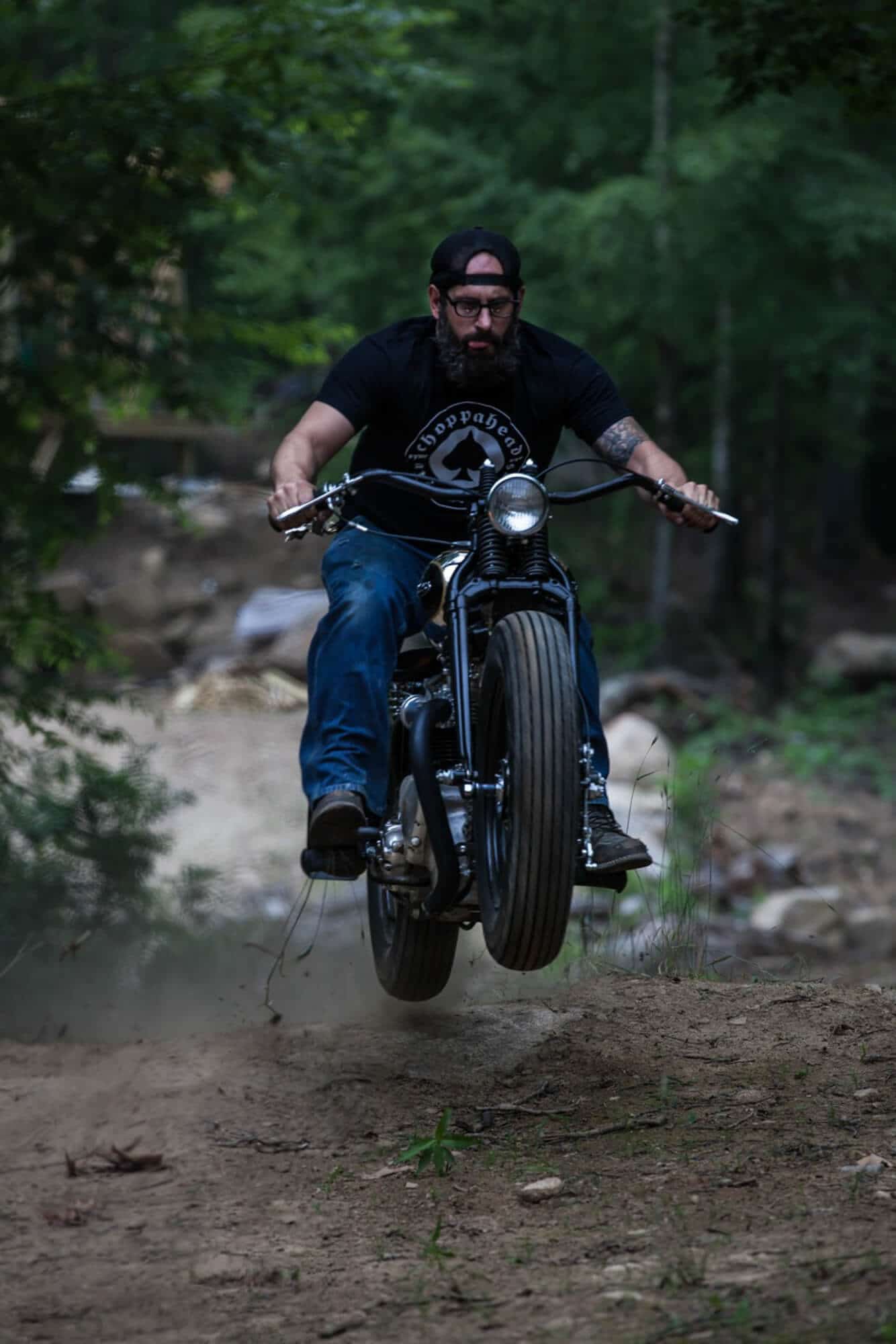 Special Thanks: Marc for letting us build a bike we wanted to build with our own direction, and for letting us beat on it for the perfect shot for the magazine. And thanks to Iron & Air for your interest in our shop. 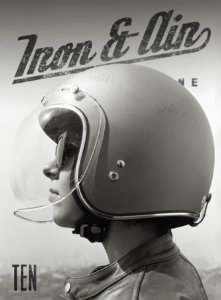 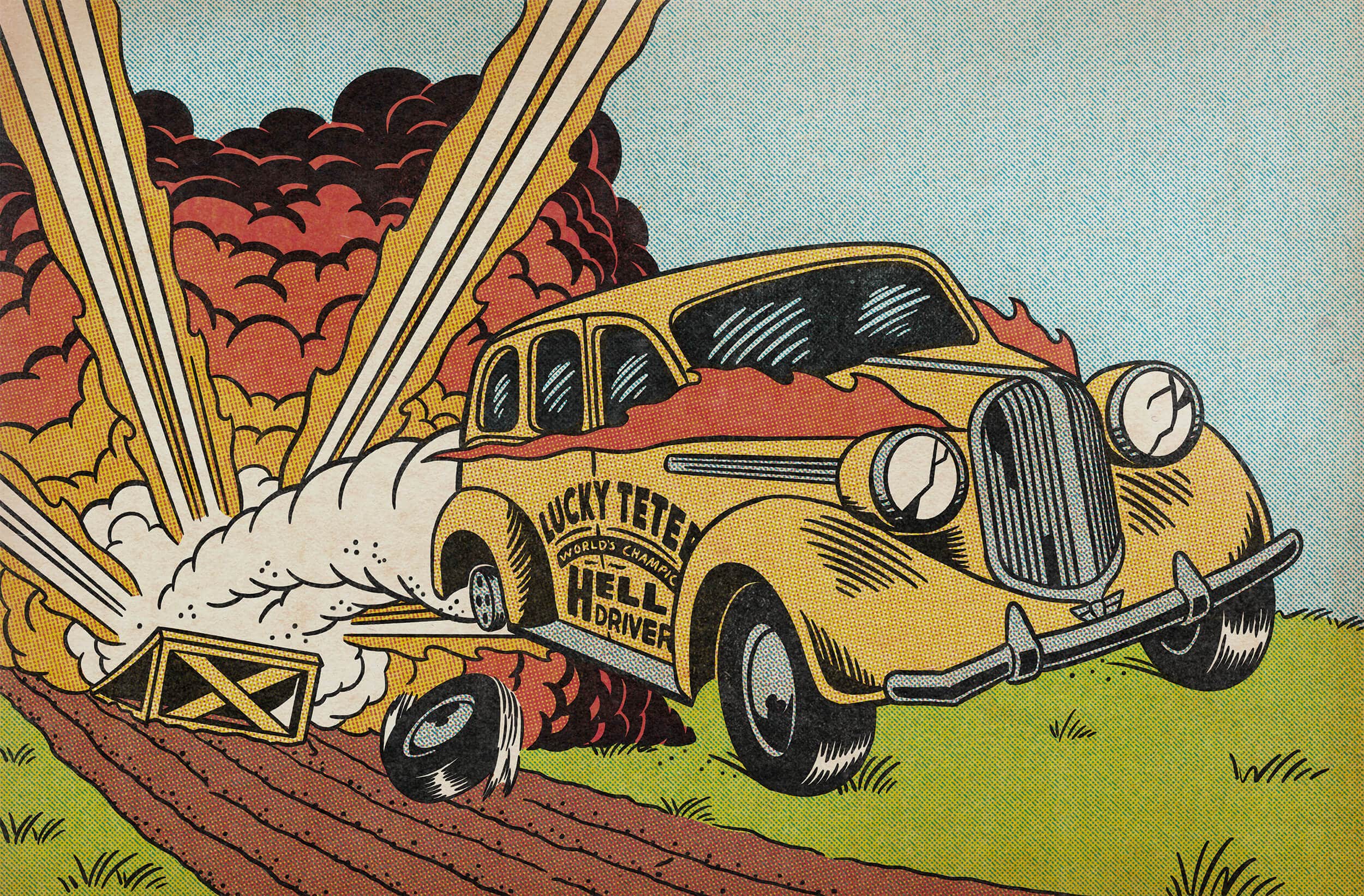