Automobiles Behold The One-of-a-Kind Trophy RatThe Trophy Rat is a mash-up of trucks, rat rods, and sports cars — and it's unlike any ride you've ever seen.

Kirkland, known as the “The Little City That Could,” is eight miles from metropolitan Seattle. Its claim to fame is that Costco formerly called it home and used the town for inspiration when it came time to name its in-house line of products.

Kirkland is a charming and quaint Washington town where you wouldn’t expect to see a ’34 International chop rod – let alone one with LED headlights, piggyback off-road suspension, and the V-8 from a mid-’00s Corvette – but it’s where Keith Northrup, the builder of the car you see here, has lived for over 20 years.

32-year-old husband and father works out of his 950-square-foot home garage and lines his pockets by building furniture and doing other specialized metalwork, a skill he started to hone at 16 while working on his ’84 Toyota pickup. Northrup began competitive off-road rock crawling at age 20 and has been building tube-chassis toys ever since. This project, Trophy Rat, is far different from the many projects that preceded it. Whereas past undertakings were trail-crawling four-by-fours, the Trophy Rat takes the best bits from trophy trucks, rat rods, and sports cars, and assembles them in a way that turns a jalopy into something brutal and imposing that won’t shy away from anything. Northrup simply calls it an “everything rig.” He says it’s his best build yet.

“You get people from every realm who like it,” he says. “From off-roaders to hot rod enthusiasts to the old, mustached ‘Timber Tamer’ guy that’s out there just loving the old iron. The old guys that are the hardest to impress will talk your ear off now.” Northrup wasn’t looking to build the Trophy Rat, but a buddy needed to unload a beat-up ’34 International, so Northrup obliged and let the corroded cab sit in his garage until he could figure out what to do with it. Seeing how it’s such a rare and distinctive truck, Northrup felt like he needed to do a special build that didn’t cut any corners and stayed true to the original while inventing a new aesthetic and improving performance in every aspect of the vehicle.

Northrup did things he’d never tried before, like cutting eight inches from the bottom of the steel body, shortening the bed by a foot, and carefully chopping four inches from the roof without making the rear window look wonky and disproportional. He tucked in the side windows a bit, repurposed original metal where he could, and TIG-welded everything so the new body lines stayed as sharp as possible. The reworked body didn’t mesh with the stock chassis, so Northrup threw out the frame, went with what he knew, and fabbed an all-new tube chassis for the truck. It was a long, tedious process made worse by the fact that Northrup still had to create custom suspension arms to accommodate the King off-road dampers with remote reservoirs, weld long-tube headers that would hang off the long-block V-8, and scratch-build a slew of other odds and ends to cinch the build together. But three years and $50,000 later, he pulled the bows tight on the Trophy Rat.

Little has been overlooked, and what at first seems to be haphazardly assembled slowly comes into view as thoughtful and meticulously formed. It’s a machine that blends off-color beauty with stunning, raw performance.

It’s scruffy and proudly wears decades of patina, but the build itself is very clean. Little has been overlooked, and what at first seems to be haphazardly assembled slowly comes into view as thoughtful and meticulously formed. It’s a machine that blends off-color beauty with stunning, raw performance. The entire body can be removed from the tube chassis in about an hour, not unlike a trophy truck, and 315 horsepower hit the ground after being sent from the 5.7-liter V-8 through a Turbo 400 three-speed automatic transmission to the rear differential. “I didn’t want to go four-wheel drive,” says Northrup, “because I didn’t want to blow up a thousand dollars worth of axles every time we went out, so we stayed simple with rear-wheel drive, and I think we nailed it pretty good.”

That’s surprising, seeing as how Washington’s wet, mossy environment and the truck’s bead-locked wheels wrapped in 35-inch Nitto Mud Grappler tires scream out that this a four-wheel-drive vehicle. But it’s less surprising if you ask Northrup about his driving style: “Just hit stuff really fast and try not to crash.”

It’s hard not to like Northrup. It gets even harder after asking him about his plans for the truck. “If we have it around long enough, it’ll be Sage’s – our son’s – first car.” Sage is a year old. If he’s anything like his dad, though, in fifteen years he’ll be driving the Trophy Rat around Kirkland, The Little City That Could. 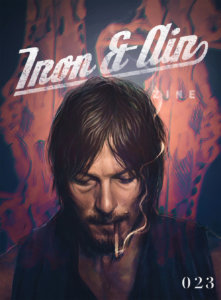