Travel & Adventure Cruising Through the Pyrenees MountainsDesigner Ashley Watson hopped on his W650 and set out on an adventure to put a jacket prototype to the test.

The sound of an engine somewhere ahead sent out a ripple of activity. I hastily pulled on my helmet and heads turned as I kicked my W650 to life, the throaty rhythm of the air-cooled twin winning a few smiles. I was waiting in line to board the overnight ferry from Plymouth to Santander.

Passport checked, I snaked through customs. From here, I could see the ship; I was looking forward to spending a portion of this trip at sea, and the ocean voyages I’d read about over the years ran through my mind. I rode up the gangplank then down into the hull to secure my bike. On the way up to my cabin, it finally kicked in — that feeling you get at the beginning of a trip. It’s finally happening.

When designing protective motorcycle clothing, I first test the fabric, hardware, and construction in the lab to ensure every element is fit for its purpose — the science doesn’t lie. After that comes the best bit, because the only way to truly know if a detail functions the way it should is on the road. That was my main reason for this trip: to test a prototype of the Eversholt Jacket MkII. My plan was to weave a line along the length of the Pyrenees and then loop back. Although I’m comfortable with the process I go through when designing a garment, I’m always interested to see if I can learn something from the way others approach their craft. If there was a reason for the meandering route I’d take, it was in the hope of finding other makers along the way.

(2) Ashley Watson's personal W650 used along his travels in the Pyrenees.

Following the N629 up and over the Cantabrian Mountains, the air began to cool. Dropping down on the other side, I entered a new weather system. The scene was surreal: sunlight filtering through clouds overhead sent a brilliant flat light across the open landscape around me. In contrast, the sky ahead was filled with an ominous dark mass — sheets of rain throwing themselves onto the horizon below. It felt like I was in the Midwest. Well, you wanted a test, I thought, pulling on waterproof trousers.

I spent most of the next day riding under overcast skies towards a small mountain village on the edge of the Ordesa y Monte Perdido National Park. An hour before reaching my hostel, heavy rain came down once more. It had been an eventful day. Rushing to fix a stuck float led to losing a cone filter half an hour south of Pamplona. I managed to find a spares shop and get my hands on a replacement, but despite this stroke of luck, for the rest of the day I couldn’t help but feel that I was chasing lost hours. A stuck float, finding a spare part, rain — writing about this now, it doesn’t seem like much. But as I hung my damp socks over the radiator that evening, it occurred to me that when traveling alone, things that wouldn’t normally seem important can become exaggerated and have a lasting effect. It works both ways: the rough becomes the smooth, the smooth becomes the rough. Halfway through a plate of food, I found the silver lining. I’d met two storms head-on and stayed bone dry. The MkII had passed its first proper test.

I was maybe a touch naive to think that high up in the mountains I’d stumble upon an artisan’s workshop. But while I hadn’t found the makers I hoped to, I did still learn something about my process.

What a fogged visor had hidden the day before now made all the difference. I was surrounded on all sides by mountains — sheer rock faces rising up, their peaks crowned by the golden hues of first light. A single-track road that runs between Sarvisé and Escalona soon became the highlight of my trip; every track that forked off left me in awe. The sun moved through clear blue over my head. I spent three hours riding 30 miles; any thoughts about keeping to a schedule were forgotten. I was exactly where I wanted to be, doing exactly what I wanted to do. I wouldn’t have added or taken anything away.

Settling into a rhythm, I spent the next few days linking together remote mountain villages. Now used to the weight of my loaded bike off-road, I felt my body relax, trusting my W650 to find its own path through loose gravel and rock. My confidence growing, I took advice from locals and followed tracks that I wouldn’t have chanced earlier in the trip.

This was one of many chance encounters that punctuated the trip, and I wondered how many of these happened because I was traveling by motorcycle

One afternoon I stopped in a village for a coffee. Walking past an open garage I noticed an old Mercedes tucked inside. Venturing in to take a closer look, I was greeted by Tony, the owner. Despite being in his eighties, his eyes were sharp, shoulders square. I found out that he’d owned the car since new. I have a huge amount of respect for anyone who takes the time to look after the things they own — I think he could see that. I didn’t need my phone to translate the pride he took in this car. It had traveled over 100,000 kilometers and was still immaculate. Before I had a chance to stop him, he disappeared to fetch the keys. It goes without saying that it started on the first try. I showed him my bike and for a few minutes, we shared our passion for things with wheels. This was one of many chance encounters that punctuated the trip, and I wondered how many of these happened because I was traveling by motorcycle. Without any barriers I was exposed to the elements, but perhaps also more open to conversation. Either way, the last few days represent what motorcycle travel is all about. This is what I design for.

I was maybe a touch naive to think that high up in the mountains I’d stumble upon an artisan’s workshop. But while I hadn’t found the makers I hoped to, I did still learn something about my process. Since arriving in the mountains, I’d been so caught up in my surroundings that I hadn’t thought twice about the Eversholt Jacket MkII. To me, that speaks volumes about the way the garment functions when riding — but also about how it works off the bike. Thinking back to the people I’d met, the conversations I’d had . . . not once had the armor felt cumbersome, not once did the jacket feel awkward. The motorcycle creates the framework of a trip, but it’s the people you meet who enrich the experience. I realized that the test trips I go on are as much about checking the function of a garment as they are about understanding what it feels like when it’s worn — something you can never understand unless you get out onto the road.

Knowing I could rest on the ferry home, I spent as much time as I dared in the mountains before riding back across the country. With a day’s worth of insects stuck to my visor, the shadows drew across the road on my final approach to the port in Santander. I had a grin under my helmet. The Pyrenees had made me work — but in return, they had given me all I’d hoped for and more. 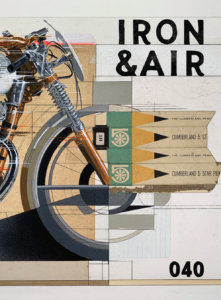