Automobiles The Son of Cobra BMW 2002 is a Carbon-Fiber Image of PerfectionPaul Lefevre — better known as Son of Cobra — builds a brilliant carbon-fiber-bodied, E30 M3-powered BMW 2002.

There’s a common thread strung between those who work with their hands. Behind the grit under their nails, the scars on their knuckles, and the calluses on their palms lays a desire to steer the world — to shape it as they see fit. To perhaps thin the chaos of our days and pull some order from the orderless. Flicking through Paul Lefevre’s portfolio, it’s clear that’s exactly what this man’s done. He spends his days creating surfboards for his label, Son of Cobra, and the work is a minimalist celebration of line and color. He does everything from shaping the blanks to glassing the boards, and his efforts have won international acclaim. But when he’s dusted the foam from his hair and cleaned the resin from his skin, he’s busy shaping something else entirely: his carbon-fiber-bodied 1969 BMW 2002.

Lefevre splits his time between southern California and the Basque coast, two places on the planet with the perfect combination of rolling waves and pavement that goes scrambling for the sky — the kinds of places made for a vintage German coupe.

Growing up in Europe, there was no shortage of racing to enjoy, but Lefevre fell in love with the B-Sedans that once terrorized tracks all over the continent. Chief among those in his eyes was the Alpina 2002, so when Lefevre finally found his car in Southern California six years ago, he wasted no time ordering up the appropriate body kit.

“All the kits you can find are for race cars, so it’s all made out of fiberglass and very poorly made. I spent so much time on the prep, making the car look good and reinforcing everything.”

That car was a 1972, and when Lefevre moved back to Europe, he took the car with him, chasing the light up the mountains now and then. When it came time to go back to the States, Lefevre sold the ’72 to a friend, but he wasn’t done with 2002s.

Lesser mortals would have left the body in raw carbon fiber to show off their handiwork, but Lefevre painted the car himself, hiding all that composite under several coats of a light seafoam green.

“I had this in my mind: I wanted to build a lightweight car,” he says. “Those cars are kind of heavy for what they are. Well-insulated, with heavy subframes. And they don’t make much power even if you work a little bit on the motor — like 150 horsepower.”

Lefevre had been glassing boards since he was 14, and the years had introduced him to all manner of composites, including carbon fiber. He used all those skills to build his own body panels, first pouring polyurethane foam on the fenders, then shaping the material by hand.

“I had full control of the curve, the dimension of it. Then I finished up with automotive clay,” he explains.

From there, he took a fiberglass mold, which then went to Marko Foam in Huntington Beach. Marko specializes in surfboard blanks, but was able to 3D scan Lefevre’s mold and mirror it for the car’s other side. Once he’d laid up the carbon fiber, it opened the possibilities in his mind. What started as widebody fenders morphed into a new roof, rear quarters, and a complete, custom front end.

“I ended up doing the whole body of the car,” he says. “Took me two years.”

Lesser mortals would have left the body in raw carbon fiber to show off their handiwork, but Lefevre painted the car himself, hiding all that composite under several coats of a light seafoam green.

Now he had a gorgeous shell wrapped around an anemic four cylinder. Not one to leave well enough alone, he sourced an S14 engine out of an E30 M3, and breathed on it until it produced a more respectable 210 horsepower at the wheels. All of his carbon fiber whittling reduced the car’s mass to just 1,800 pounds, ready to run. Lefevre walked a difficult line with the car, reducing weight wherever he could while retaining some of the civility required of a street car.

“I removed everything I could,” he says. “The wheels are aluminum. The brake calipers are aluminum, but I still kept the roll cage and the spare tire. I just wanted a good balance between the weight savings and the cosmetics of the car.”

Like his boards, the 2002 is achingly beautiful and unlike anything else in the world, but it isn’t made for sitting around. Lefevre spends his time sprinting up and down California’s web of gnarled canyons, or out at Willow Springs, turning laps over the same legendary course that Ford factory driver Ken Miles once called home. Lefevre moved that S14 back three inches in the chassis for better weight distribution, and he says the car is a riot, on track or off.

“It’s so fun,” he says. “Really, really fun. I’m very into canyon driving and mountain roads more than the track, but the track here is always cool and fun.”

Lefevre moved that S14 back three inches in the chassis for better weight distribution, and he says the car is a riot, on track or off.

When asked what’s next for the car, Lefevre sighed.

“Everything was a challenge. As soon as you change one thing, you have 10 other things you have to change.”

But the thing about being able to shape the world as you see fit is that there’s always more to do, more to chase. There was a pause just long enough to hear Lefevre turning the car over in his mind. He figured out he can use the steering rack from a Ford Escort rally car, he said. Something with a very quick ratio.

“So I’m going to try that next week. Hopefully it’s not too quick. It’s probably going to change the whole car.” 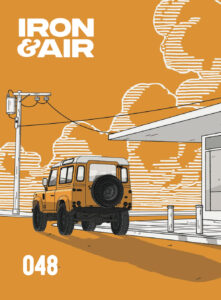