Motorcycles Craig Rodsmith was Broke. Now He’s Making Rolling Two-Wheeled MasterpiecesMost people think Craig Rodsmith is an overnight success, but in 2016, he was sleeping in his van and had everything he owned on his back.

Most people think Craig Rodsmith is an overnight success. He came out of the shadows and impressed attendees of Austin’s Handbuilt Motorcycle Show in 2016 with his “dustbin” Moto Guzzi racer, a turbocharged testament to the ’50s, when manufacturers were pushing the outside of the performance envelope. The bike’s hand-formed, full-fairing, mirror-finish body looked stunning in person, and Rodsmith found a buyer for the bike before he left Texas.

Suddenly, he found himself at the forefront of the “neu custom” bike scene. But Rodsmith has been building motorcycles for over 40 years, wrenching away in a vacuum far from general acclaim. He started in his father’s shed in Australia, then continued working on bikes as he bounced between odd jobs and punk rock gigs. He’s a student of history, and each of his builds hearkens back to the very end of pre-war performance and the very beginning of post-war hooliganism. Each of his builds — from Goldwings to VFR Hondas and everything between — pull inspiration from a common vision, glistening with a look that is organic, retro, and purposeful.

For over 20 years he’s worked out of a no-nonsense shop north of Chicago, his personal cathedral littered with bikes and absolutely devoid of latte art or selvage denim lifestyle accessories. His machining and polishing work is peerless, and he uses ingenuity to appropriate what he can’t make by hand, like a headlight bucket from the bottom of a fire extinguisher. Craig builds bikes with a commitment that defies his hourly rate; it borders on religious fanaticism. Rodsmith is what self-important marketers refer to as “authentic.” His craggy face has a stone-cold glare, and his ironic sense of humor relies heavily on the word “cunt.” Rodsmith isn’t even his last name, but everyone just sort of assumes it is.

National attention? Not so much. He’s more concerned with getting the right chamfer on the tail section to match the newly upholstered seat.

When Craig showed up at Handbuilt in 2016, he was broke — as in, no-money, shop-shut-down, sleeping-in-the-van, everything-he-owned-on-his-back broke. He recalls that weekend in Austin and talks about it like he came across a burning bush. He sold his dustbin, lined his pockets, and got a lot of attention from major brands in motorcycling, including Moto Guzzi, which immediately commissioned him to build the V9 Roamer you see here.

Rodsmith’s V9 is tidy and doesn’t appear dramatically altered, but it’s far from mild in terms of a custom. For one, it’s got a turbo: a small T15 from Garret. Engine tuning came courtesy of Joe Walano at The Guzzi Doctor. The tank is a testament to Craig’s fabrication skills, featuring dramatic scallops that reflect the protruding heads of the opposed-twin engine-like mirrors on the ceiling of the Playboy Mansion. The switchgear housings and brackets are all handmade out of metal; no fiberglass or out-of-the-box parts here. All of the electronics have been hidden away, and most of the Guzzi’s components have been upgraded with aftermarket parts, from Panigale forks and Kineo wheels to a one-off intake and exhaust system.

I’m excited to fire it up,” says Craig. “It should light a small pants fire.

Craig tells us that “movement” is a critical aspect of his builds, meaning that his bikes need to look fast sitting still and back that up with true rideability. “I’m excited to fire it up,” says Craig. “It should light a small pants fire.” Like many of Rodsmith’s builds, this V9 has been polished…and polished and polished again. You can see Craig’s pained nitpicking as he grumbles notes to himself about “mistakes” that are, as far as we can tell, figments. The end result turns a handsome factory offering into a truly bespoke piece of two-wheeled art. It’s hard to improve on Italian design, but Craig has found a way to complement Moto Guzzi’s work.

Craig is one of only a small handful of talented builders Moto Guzzi invited to build V9s for marketing purposes, but he’s nonplussed; excited, but not overwhelmed. A misfit cowling is enough to make him rage. National attention? Not so much. He’s more concerned with getting the right chamfer on the tail section to match the newly upholstered seat.

Craig Rodsmith is an overnight success 40 years in the making. He’s finally being widely recognized for his dedication to custom motorcycles, but by all appearances, he’s not perplexed by it. He’s simply doing more of the same, building the best bikes he can with talent to spare. 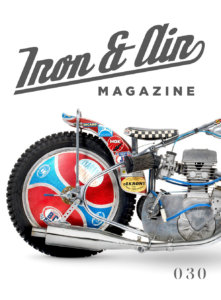