In late 2014, Gary Smith, CEO of the performance fabric brand Polartec, took delivery of a brand-new Porsche 911 GT3. But after only a month of fair-weather driving, he reluctantly put his Porsche into storage. Smith realized he wanted something tailored to his needs and specifications — something that could handle New England’s brutal winters — so he commissioned Emory Motorsports to build an all-wheel-drive Porsche 356 Outlaw.

The level of enthusiasm that the 356 conjures seems outsized for what is essentially a Volkswagen Beetle: a tiny, underpowered bubble of a car born out of fascist Germany. But what a superficial examination doesn’t reveal is a story of tenacity; that story, in many ways, begins with the 356. Before World War II, Porsche was a design and consulting firm that built tractors, Grand Prix cars, tanks, and the VW Beetle. After the Reich fell to British occupation, Ferdinand Porsche spent 20 months in prison for war crimes without ever receiving a trial.

During that time his son, Ferry Porsche, began developing what would become the 356, Porsche’s first production automobile. By the early 1950s, the company had returned home from Austria and built two manufacturing facilities in Stuttgart, Germany. There they produced the unibody, rear-engine, rear-wheel-drive 356. Porsche sourced air-cooled engines from the Beetle, modifying them for better performance. The engines put out around 40 horsepower in 1948 and were producing up to 150 horsepower by the time production of the 356 ended in 1965.

Smith has long loved the 356. “That shape was imprinted on me as a kid when I moved to West Lebanon, Maine, in 1970,” he recalls. “There was an elderly woman who owned an old farmhouse where she ran a business selling antiques out of the barn. I used to do odd jobs for her in exchange for small money and old stamps. In the corner of her barn was a car covered by sheets … the unmistakable shape of a 356. It was her son’s, who had purchased it while stationed in Germany. He had been killed, likely in Vietnam, but she would not talk about it. The car sat there, surrounded by boxes of old stuff.”

The 356 left an indelible impression on Smith, and a ‘65 “C” coupe proved to be the perfect foundation for his Allrad Outlaw Emory build. “Rod Emory is third-generation SoCal custom car royalty,” Smith says. “His grandfather, Neil, was one of the principals in Valley Customs Speed Shop in the ’50s, a pioneer in channeling and sectioning cars for the Hollywood elite, and even built concept cars for the big three auto brands.” Once considered “outlaws” by purists, today Emory Motorsports is at the forefront of a new wave of coachbuilders, reimagining Porsches with exquisite attention to detail.

The drivetrain comes from a ‘90s-era 911 Carrera 4; the system uses a hydraulically controlled, planetary-type differential to deliver up to 31 percent of the torque to the front wheels, and the rear differential can be locked or left open, varying the amount of torque sent to both wheels. The drivetrain’s torque-vectoring system is controlled through driver-adjusted hydraulic valves, like the setups in Porsche’s early Paris-Dakar rally cars and its C4 factory race cars. The five-speed manual transmission is similar to the gearbox in the vaunted 959 supercar, and Allrad Outlaw is painted Porsche Graphite Blue Metallic by PPG to match Smith’s GT3. The car is topped off by a custom titanium roof rack built by Independent Fabrication — the other company Smith runs — to carry the custom bicycle Smith built to go with the car.

It’s true that necessity is the mother of invention, but imagination is the mother of creation. Though Smith’s 356 has many elements tailored to his specific needs, this car is about expression and fun, born simply because he wanted a classic, all-wheel-drive, four-season Porsche. The world is full of precious things that never get used for their intended purpose. They sit in climate-controlled rooms, get dusted and pampered, and become prisoners of their own beauty. This Outlaw isn’t one of them.

In the corner of her barn was a car covered by sheets ... the unmistakable shape of a 356 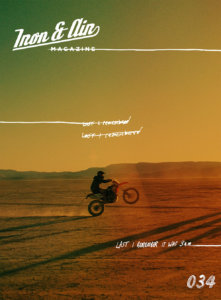