Art & Design Artist Pat Perry on Slab City, His 4,000-Mile Ride, and Getting Arrested … TwiceAnd check out some of Perry's illustrations Moleskine of illustrations during a recent cross-country motorcycle trip

Pat Perry is a transient artist, photographer, and illustrator from Michigan who wove together an interesting Moleskine of illustrations during a recent cross-country motorcycle trip. Pat’s work has been featured in Juxtapoz and The Huffington Post, and his clients have included The New York Times, VICE Magazine, and Emerica.

Pat took some time to sit down with us and have a chat about dusting off the burned-out Slab City, freezing his hands to the throttle of his Sporty, and conjuring sordid creatures inspired by bleach soaked truck-stays from the depths of his psyche.

Iron & Air: Who are you, where are you from, what is your favorite food, and have you ever been arrested?

Pat Perry: I’m an artist from Michigan. I don’t always feel like where I’m from is the most interesting or relevant thing to talk about when it comes to me as an artist. However, in the context of motorcycles, the environment around my hometown, Grand Rapids, has played a role in what riding and working on motorcycles, or any unreliable vehicle for that matter, means to myself and the people around me.

I’ve been arrested twice, being spit out the other side of the judicial system with fines and mild parole in both cases. Once was for occupying and blockading a frack-waste facility in southeastern Ohio, and the other recently for riding trains in Oregon.

What is your background in art and photography?

The most important and notable part of my education was that my mom was a schoolteacher, and we read a lot throughout my childhood. I’ve been drawing my whole life. I went to college as a painting major for three years, then dropped out, acting half on principle, and half on aggravation.

Art & Design Artist Amanda Zito: “I Struggle to Do What I’m told.”

Amanda Zito snapped her throttle wrist this past July while riding solo to Rocky Mountain Roll, an annual “redneck ...

What led you to art as a career path?

It’s not a career to me, and if there is some sort of path for my life, I’d hope it wasn’t strung up by anything work-related. My main push is to make good work, and making money is something I have to take care of like I have to brush my teeth. I wake up, brush my teeth in the morning, and go on to the next thing. I don’t spend all day thinking about new ways I can brush my teeth better, and all the new skills I’m going to use to really excel at teeth brushing. But that’s the career/money/achievement aspect I’m talking about. Don’t get me wrong: I work long hours and dump everything I have into projects, but the ones I’m getting paid for aren’t necessarily the ones that make my heartbeat.

We don’t really have that much time here, and I want to make sure I’m applying the bigger ideals and motivations I have to my everyday routine, or lack thereof. Art is a broad category, but there are vital functions of art and culture, and as someone who’s participating, I really try to reflect that in my work and personal life. It’s a honing process, but the clarity improves as the years go by and as I continue to be hard on myself and as intentional as I can be.

Your art has a somber, psychedelic, and stark surrealism. Where does that come from and who are your influences?

I try to be as honest as I can, and it is what it is, in the end. My perception of reality is dark, but I’m not unhappy. There are horrible things happening. The whole structure is wrong, and we are losing our ability to have a voice or take agency over our own lives, our own paths — especially young people. It scares me to death, and I’m horrified by this ubiquitous charade, constantly sedating us and whispering that everything is okay and this is the best way we could be existing, the only way we could be existing.

That’s the context, but I’m not unhappy. I make pictures of things I love, make posters of things I hate, and write my own story a page at a time about what things looked like to me with my feet on the ground underneath that stormy sky.

The most influential people to me are other kids I know, and friends of mine that are finding a way to make their art regardless of the odds against them. My friend George bundles up and publishes books all winter long in a non-insulated, freezing cold warehouse studio the size of a one-stall garage. My friend Reece goes broke working for the gravel company long hours all week just to throw his whole paycheck at his eccentric chopper projects. Some of my friends have to steal art supplies so they can paint, and replace our bombarded city with art instead of ads. My friend Charlie has been spending his nights off all summer building a giant skate bowl on the west side of Grand Rapids because the city won’t give the kids a skate park.

Did you build it? Have you named it?

I bought it from my friend Brad, who put it in the Paco frame and did most of the building before I had it. I’ve changed it some, but mainly have spent my effort fixing things as they fail or break — wiring, starter, carb, airbox, cables, oil leaks — nothing too intense on this one so far.

What was the funniest, scariest, or weirdest thing that happened while you were on your trip?

The whole thing is so unbelievable and over the top. I asked Nate and he said I should tell you about Roswell, or about when our hands were frozen to the throttle when we left Michigan and it was 28 degrees, or about when I lit my pants on fire, or about when he somehow crashed on a 50cc moped in the Bay Area after riding a Harley Davidson motorcycle across the country with no problem. It’s hard to say. It was a lot in three months.

Slab City was weird though.

Nate and I rode to Slab City near the Sultan Sea on our way to L.A. We rode through the desert and dunes in the middle of the night to get there. When we finally made it, I expected to ride into a bohemian village of toothless vagrant men, junkie musicians, and gypsy women dancing around a tiki torch-lit speakeasy built out of trash that various transient weirdos had brought throughout the years to the squatter oasis.

In reality, we showed up to a dried-up, spread-out, concrete pancake. When we woke up in the morning though, there were just trailers and broken cars and tumbling plastic Walgreens bags stuck in the thorn bushes, Tyvec everywhere. It makes sense now, I guess. People live in Slab City to be hermits mostly and to stay away from the thick muck of people that might bother them if they lived somewhere with running water.

Before we left, we were in the small town closest to Slab City and Salvation Mountain, and a man on horseback rode out of the dust in the distance. It was a seven-foot-tall reptilian desert-hippie riding a pack mule. We were sitting on the curb in front of a store and he talked to us for a while about how he travels to and from Mexico following the canal systems, almost always alone.

He looked like a face-tattooed Matthew McConaughey if he’d grown up on a commune with Rumpelstiltskin for a dad. Eventually, he mounted the mule, turned up his yellow battery-powered stereo, and rode off.

If your motorcycle was an animal, what would it be and why?

If I said it was a pack mule, what would that make me?

I think that’s pretty utilitarian. A 1200cc Sportster is at least a decently fast mule, no? I picture mules being slow and ornery.

Just goofing, per the pack mule I mentioned above. It’s more of a hound, a hunting dog. It’s fast and stripped down, but actually runs and performs more reliably than the older Harleys — in theory, at least.

I love that thing. I almost sold it recently. I get annoyed with the flashiness of the whole macho cool-guy culture surrounding choppers, but when it comes down to it, I try to remember the parts about it that I love: being forced to work on your bike yourself, valuing the romance of riding a butt-naked motor on wheels rather than the practicality of something new and comfortable, riding with my friends, breaking down with my friends, and not giving a shit about who gets it and who doesn’t.

Could you tell me about this image above? What was happening and what inspired it?

The drawings in my Moleskine are usually observational, drawn while traveling in some place or situation. That one, though, is just from my head, drawn on our trip while in Arkansas, stuck at a Love’s truck stop. It was cold and we were camping in a field behind the row of idling semis with sleeping drivers inside. Nate and I had time to kill while we waited in the evening to be tired enough to sleep so we just sat in the cold plastic booths for hours smelling the fried chicken and bleach-mopped tile floor. I draw from my imagination when I’m stuck in spots like that. After I stop for a while from riding motorcycles and all the exciting rushing around, the stormy skies come back. 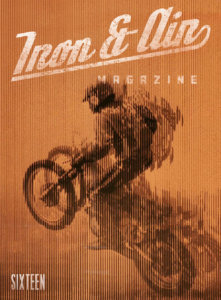