Culture My Father, The Racer: Reflecting on the Mid-Century Sportsmen of MotorcyclingPhotographer Dustin A. Beatty shares the personal photographic archive of his father's racing days.

As many sons do, I looked up to my father, and not just because he was the only dad I knew who raced motorcycles. A handful of trophies were on display between the pine studs of our garage. A tattered On Any Sunday litho print hung proudly on the wall, and taped to the back of my dad’s toolbox were yellowing photographic prints of him riding wheelies through the creosote bushes in the California desert and sliding around a flat track. Our bikes were always meticulously detailed; he was religious about the wash, rinse, and repeat routine, and especially the potential flaws that could emerge with each stroke of his brass brush. His white Bell Helmets paperboy cap floated around the garage until he added so many finisher pins that it was too heavy for regular wear.

I remember sitting on his BSA with the mirrored toaster tank and my mom’s Honda trials bike, which my dad boldly outfitted with a guttural Supertrap exhaust that made it sound more menacing than it was. My mother wasn’t too happy about it, but tinkering and modifying was in his DNA. Like me, it was something he inherited from his father.

“My dad brought home a 1962 Triumph Cub from a guy called Don the Bandit in San Gabriel. I don’t even think it had a pink slip,” he says when I ask how he got his start. The Cub was a weapon of choice for the pros and a number of sportsmen who raced the famed Catalina Grand Prix from 1950 to 1958. It was America’s attempt at recreating the Isle of Man TT with all the bar-banging chaos of a desert race and hundreds of competitors mashing through the streets of tiny downtown Avalon. My father was too young to enter, but he did his best to recreate the thrill of racing around the streets and alleys of his hometown, Whittier.

Southern California was just beginning its suburban sprawl, with massive tract homes replacing orange groves and beet fields. TT and motocross tracks dotted the changing landscape, and free-range terra firma provided hill climbs, jumps, and plenty of room to experiment. My grandfather had a 500cc, single-cylinder AJS that my grandmother wouldn’t let him ride, but my dad did; he would stand it up against the pool wall to kick it over and come screaming up the alley at 80 miles per hour. His high school friends started showing interest not only in free riding, but also in modifying their bikes, and since the AJS would never see dirt, my father sold it and opted for a Suzuki Scrambler with interchangeable sprockets and a booming expansion chamber. It sounded tough, but it didn’t have the grunt of his friend’s 200cc Bultaco Sherpa. “That was one of the best dirt bikes out there at the time,” my dad says with the familiar conviction I recognize as a serious stamp of approval. “I’d take the Suzuki up into the Whittier hills and my friend was on the Sherpa. He would climb hills with it and do everything else. Boy, it was fast!”

In the 1960s, desert racers like the Checkers were the cowboys of motorcycle culture, riding fully pinned and bucking through miles and miles of untamed and unpredictable terrain.

It was the nudge he needed to finance a Bultaco Matador, which he stripped down to make it more of a dirt bike. My father and his friends were sharing the dirt with members of the famed District 37 racing club — namely the Checkers, who were the winningest gang of racers at the time. “The holy grail of desert racers were those guys,” he says. “You could spot their jerseys from a mile away and you knew they were someone to talk to.” In the 1960s, desert racers like the Checkers were the cowboys of motorcycle culture, riding fully pinned and bucking through miles and miles of untamed and unpredictable terrain; deep whoops, bottomless sand, rocks the size of basketballs, rutted-out hills, and blinding dust all pitted man against man, each at odds with his machine. Household names like Bud Ekins introduced actor Steve McQueen to the circuit, and it was fairly common to see them and J. N. Roberts, Malcolm Smith, and John Steen in the top-five standings.

The allure of these names and desert racing culture inspired my dad to enter his first sanctioned scramble after a stint in the Navy. After the “bomb start” — where hundreds of riders held it wide open past the mound of smoking tires — my dad overshot a corner, launched off a ledge into a riverbed, and went home with a busted bike and a bruised ego. Never one to give up, he shifted his focus to the growing popularity of motocross racing, which started in Europe and made its way to America in the ‘60s. The closed-course, competition-style racing was less unpredictable than desert racing but came with its fair share of balls-out chaos over a set number of laps. Riders like Swedish champion Torsten Hallman were the benchmark to beat, so my father decided to ride what “Mr. Motocross” rode: The Husqvarna 250-R. It was the dominant force in the world of motocross and off-road racing, and it helped my dad roost his way across the finish line at tracks like Ascot, Fontana, Escape Country, Claude Osteen’s Cycle Park, Carlsbad Raceway, Mammoth Motocross, Corona Raceway, and Saddleback.

There’s no doubt that the racing was as cool as it looks in photos, especially on the tracks that attracted the most famous riders. On any given race day, the pros rubbed elbows with sportsmen like my father — sometimes a little too closely. Once, my dad almost killed himself and Swedish champion Bengt Åberg. “[Saddleback] had a gate system, but not as sophisticated as they do now, where they’d drop it,” he remembers. “There were guys practicing going up the hill. The only problem was that when you came around the corner, it flattened out and you couldn’t see. There were guys practicing trying to get a start and Bengt was in and among those because it wasn’t regulated. I got my bike out there and there was a chute that you had to come down from the top of the hill to the right, but no one was choosing that line. They were turning around and coming down over the top. I did my best run, turned around on the top, and there was Bengt on a collision course toward me. He wiggled, and we clipped foot pegs. He didn’t go down and I didn’t go down, but I knew who I almost crashed into. I went back to the paddock and hid, and shortly after there was an explosion where two guys crashed into each other … parts and helmets everywhere.”

Run-ins were pretty common, and one I embellish most often is the time my father crossed the finish line before Steve McQueen could catch him. The real story is that the only checkers he saw at that race was McQueen’s club jersey as he passed my dad. His memory of sharing the track that day was immortalized in a sneaky series of faraway portraits of McQueen and his wife, Neile Adams, looking on as the “King of Cool” smashed a beer in his dirty leathers.

I was barely learning to walk when all this was happening, while my mother and grandparents stood trackside or watched from the paddock, snapping warm Kodachromes with a telephoto lens. My mother was hooked on riding, too, and ripped around on her minibike until graduating to a 125cc trials bike. She’s grinning from ear to ear in all the photos I have of her. “Riding with your dad was where I always felt the safest, thus restored and mended from our stress at home,” she tells me.

My father made a conscious effort to only push himself so far. He went from dust to glory racing in the intermediate class, often finishing in the top five. To go pro meant taking risks that would put our family’s well-being in jeopardy. “The top riders you’d read about in Cycle News got all busted up because that’s what happened when you were trying to be the fastest,” he says. “I had to balance out my life: family, going to school after getting out of the service, and work. That was part of the deal with your mom.” Like many other sportsmen, my dad’s dedication also meant long hours in the shop, rebuilding top-ends and prepping for race weekends, earning my mom her CB radio handle, Garage Widow.

The story my dad likes to tell the most is how he got me hooked on motorcycles. On a family camping trip around the tail end of his stint as a racer, he plopped me on the tank of his bike, which was pretty normal for both my parents to do. “You were about three years old,” he laughs. “We were out at the El Mirage dry lake bed, and my Bultaco Frontera had the high tank that you could hold on to. I wanted to see how you would do and when I turned around at the end of going 100 mph, you were just laughing, saying, ‘Faster! Faster!’”

All of his trophies and yellowing photographs remained through my youth while we maintained a steady routine of riding together as a family just about every weekend in Lucerne Valley. Hundreds of other prints and Kodachrome slides immortalizing his career as a racer were boxed up and put in the rafters as he passed the torch to my brother and me, showing us places he used to practice in the California desert. He kicked over his XR600 one last time in his mid-40s, and shortly thereafter sold his bikes to make room for a new life. Two years later, I threw a motorcycle in the back of my truck as I left for college and started my own journey as a sportsman. My dad and I bond over those perfectly preserved prints and slides that tell the story of my childhood hero: my father, the racer. 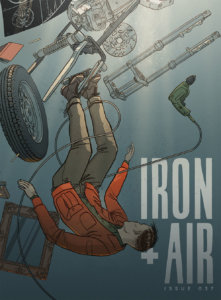