Named after the famed International Six Days Enduro, the KTM 500 EXC Six Days is one of the best enduro race bikes money can buy. Highlights include a 510cc single-cylinder motor, a featherlight chromoly frame, WP Suspension parts, and a ludicrous dry weight of 246 pounds.

It looks the business too — if modern off-road bikes are your thing, of course. Most people probably wouldn’t pick it as a donor for a retro-styled custom scrambler. But Aussie Dan Mickan did and ended up with this spicy take on the KTM 500.

Brisbane-based Mickan has been obsessed with motorcycles since he started riding at the age of 10. He’s also a fan of custom bikes, thanks to Australian workshops like Deus ex Machina and Ellaspede. So it was only a matter of time before he took a crack at building his own.

The idea to customize the KTM popped up a few years ago, while Mickan was attempting to scratch a very specific itch. “I was looking to buy an old Honda XR600R,” he tells us, “because I wanted a vintage motocross or enduro-type bike to ride at events like Ellaspede’s Dust Hustle, or some local ‘vinduro’ events.”

“At the same time I also had this 2015 KTM 500 Six Days edition sitting in my garage. I thought that if I bought an old XR, then all I would do is ride it, throw money at it to improve suspension and engine performance, and never ride my KTM 500.”

“I was really blown away by the Roland Sands ‘Kurt Caselli’ build, which basically introduced me to the idea that you could customize a dirt bike — which, until then, I never even considered. With that in mind, my plan was to build a 1980s-styled vintage enduro machine using my KTM 500 as a base. I would then have a bike that would have the vintage enduro looks, but all of the modern engine performance, reliability, and suspension tech.”

Mickan kicked off the design process by printing out a bunch of photos of stock motorcycles, custom builds, and fuel tank options. He then grabbed scissors and literally cut and pasted bits and pieces together until he had a clear direction in mind.

Next, Mickan stripped the 500 EXC to its bones and started hunting for local craftsmen and fabrication shops to help him bring his vision to life. “I know my way around a workshop, but I’m not a particularly talented fabricator,” he admits. “I also have three young kids, so finding the time to spend building bikes is a challenge.”

Luckily, Mickan is extremely good at one thing in particular: project management, because that’s what he does for a living. So he made a list and start farming out the hard jobs.

For the subframe, Mickan built a mock-up using plastic conduit tubing — then gave that, and a detailed technical drawing, to a local fabricator. He returned an exact chromoly steel replica, which bolted straight to the 500’s frame with minimal tweaking. Extra care was taken to maintain the KTM’s aggressive ergonomics because the intention is to ride it as it was designed to be ridden.

The local Brisbane bike community is really full of great people. The final product would not have turned out as well without the input from these people — they all know who they are.

Next, Mickan had to figure out one small — but crucial  — part of the build: the fuel tank. “It’s probably the design element that the whole build revolved around the most,” he says. “It’s off an early ’80s Honda XL 185, and I love it for its boxy lines and small size.”

Mickan once again relied on a local artisan to modify the tank to fit the EXC subframe. He had the added challenge of squeezing the OEM fuel pump in there too, but in the end, it all worked out.

Next, Mickan had the blocky seat built to match the tank’s lines. Refinishing it in the same blue as early ’80s KTM motocross bikes was an easy decision, and eventually informed the rest of the bike’s livery.

To keep things super practical, the OEM air and battery boxes were modified too, so that they could still fit inside the new subframe. For the exhaust, a DanMoto muffler was mated to the modified KTM header.

The fenders and headlight nacelle are all standard Acerbis plastic bits. Mickan picked these because they are era-appropriate, but also easy to replace if he should accidentally hurl his bike down the side of a hill. The side covers are custom pieces.

Mickan’s last hurdle was to get the livery just right. Working with a designer, he ended up with 1980s-inspired graphics that still retained some of the elements of the original bike’s design. The 2015 model’s decals commemorated the Argentinian edition of the ISDE, so that was carried across, too.

Another reason that Mickan sourced out individual jobs on this project is that he didn’t have the budget to dump the bike at a top custom shop to have it done in one shot. In the end, those time and cost restrictions meant that the build took almost three and a half years to complete.

“Along the way, I reached out to a bunch of people to bounce ideas off and run design advice by,” says Mickan. “The local Brisbane bike community is really full of great people. The final product would not have turned out as well without the input from these people — they all know who they are.”

So was all that time, money, and effort worth it? We say yes. If this retro-fabulous enduro doesn’t get your heart racing, you might not have one. 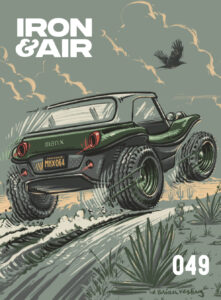