Motorcycles Harley-Davidson Triple Shovelhead: Tracking Down a Long-Lost TreasureA historic mechanical marvel, this is the world’s first Harley-Davidson three-cylinder Shovelhead. And it was made in the woods of New Hampshire.

Nick Keating is the man behind the lens of one of the most popular images we’ve ever shared on Facebook. It was a photo of a 1926 Indian Prince on a dirt road, surrounded by luscious, summer greenery. It’s a beautiful shot, but we couldn’t have predicted the viral response to the image that caused Nick to reach out and thank us.

When he did, we realized he and the bike were only an hour north of us. Not only was he was living in our backyard, but his father, Brian Keating of the Keating Wheel Co., just happens to be a steward for some of the rarest and most interesting motorcycles in the country.

It was through this chain of events that we came to find a long-lost treasure: the Harley-Davidson Shovelhead triple. Yes, triple. It’s 111 cubic inches, and 1800 cc’s of pure American metal. So, we asked Nick to interview his father and find out more about this rare piece of custom motorcycle history.

Nick: Over the years, I’ve seen you drag some odd machines in through the doors, Dad, but this certainly has to be one of the strangest.

Brian Keating: It is an oddity for sure, and one that doesn’t jump out at you right away. It sneaks up on you. At first, it looks like a crusty FX Shovelhead. It’s like a queen or king in a peasant’s clothing perhaps. It started out as a 1982 Harley-Davidson FXE model. But with the additional cylinder, the machine work that needed to be done, and removal of the original serial and VIN number, it is considered a custom – a creation by the late, great Bobby Labrie.

Who was Bobby Labrie?

Bobby was a trained Harley mechanic. He went to the service school in Milwaukee in 1949. After his schooling, he worked for his father for many years at the Concord, NH, Harley-Davidson dealership. Around 1973, Bobby decided to go off on his own. He set up shop in Concord, calling himself Bob’s Cycle Repair. It was a small shop pretty much run out of a two-car garage. He was a man of character, always knee-deep in building and repairing motorcycles and other shenanigans. I personally only spent a little time with Bobby at his first location in Concord; a few visits – parts-picking and social. He was always willing to help with the many questions I had with projects going on at that time.

When Laconia/Belknap races were going on, Bobby was always busy with setting up race bikes for privateers, and even the factory riders from Harley would stop in. He was good friends with the XR-750 guru Dick O’Brien, who was the #1 guy for the Harley-Davidson race team in that era. The story goes that Dick O’Brien always went to Bobby first when visiting New Hampshire to get the bikes set up and dialed in for the upcoming events!

There’s a lot of interesting history and a bit of folklore to Bobby’s creation. When did you first come across the motorcycle and how has it come to find a home here?

Bobby became quite a good friend of mine. For whatever reason – and I seriously do not know – Bobby took me under his wing, so to speak. It was through our friendship that I learned of his creation. When he relocated his shop to Loudon, NH, from Concord, I was able to visit more frequently, usually getting there around 8 AM and hanging out, talking, and buying parts and such. I had to always bring my contribution of beverage of choice, as was customary at the time.

After Bobby’s death, I kept in touch with the family, and every once in a while, I would visit and acquire parts and pieces. But the conversation would end quickly whenever we spoke of Bobby’s Shovelhead. I understood that it was, and is, special, both to the family and to all who knew of it.

A few years back, the time had come to do something with the machine. Many people were interested. Even folks from across this country voiced interest. We let the chips fall as they may, and without fanfare or marching bands, we were the lucky ones to acquire this special motorcycle.

Bobby never spoke much in detail about what he did internally. A large part of his process remains a mystery.

Most people encounter this machine for the first time with a look of delayed wonder. I like that metaphor – a king or queen in peasant’s clothing. There’s an “Aha!” moment as you spot the third cylinder break through the down tubes. What is this peculiar machine, and what technical and engineering feats had to be overcome?

A mechanical marvel, without question, and historic, as this is the world’s first Harley-Davidson three-cylinder Shovelhead. It was copied much later – or I should say another example was made – by Jim Fueling, circa the 1990s. Bobby was just a one-man band working out of a two-car garage, making this feat only the more impressive. He was very much a clever man. His knowledge of engines was amazing. He had to do a lot internally to the connecting rods and cams, the timing of the three cylinders, and the machining of the factory cases to accept the third cylinder.

He also had to design an intake manifold that would be able to feed all three cylinders, fabricate an exhaust system, and modify the frame to allow space for that third cylinder. Actually, on this FXE Harley frame, Bobby grafted on a wishbone frame section (’50s-era Harley frame) coming down from the steering neck to allow the added cylinder to go between the down tubes. Bobby never spoke much in detail about what he did internally to the Shovelhead. A large part of his process remains a mystery.

Many stories and tales have circulated, and some will continue as Bobby intended. The one that comes to mind the most is how he did the motor internals – the rods and cams. On the connecting rods, we will continue the mystery as we haven’t been inside to look. My feeling is that if it isn’t broke, don’t fix it. On the cams, we can safely say this: Bobby was friends with John Andrews [of Andrews Products, producers of high-quality performance motorsports parts], and it was with his help and knowledge that they achieved the cams and timing.

One of the interesting stories, or possibly tales, was when Bobby was at the Harley Rendezvous showcasing his mechanical marvel for the first time. A rather overly cooked or partied out attendee was giving some lip to Bobby about that front cylinder being a dummy. Rather calm and cool, Bobby suggested to the individual that he grab ahold of that front header pipe and to let him know then if he thought it was phony. Needless to say, we know what happened wasn’t pretty.

My understanding, also, is that Bobby never really finished the third cylinder, at least not completely. When he was getting it ready for the first showing at the Harley Rendezvous in 1982, he had to borrow a front end off another motorcycle. It appears Bobby had a limited budget to work with, and that makes it even more intriguing. He also brought it to Daytona Beach Bike Week in March of 1983, presumably to turn heads at the Rats Hole motorcycle show.

Later, Bobby may have been approached by someone at Harley as they wanted to know exactly what he did to the inside of the engine. Bobby wouldn’t tell, and as the story goes, he was offered a big chunk of money for his creation. He didn’t let it go.

Another story that comes to mind was that the motor had been sabotaged. Fortunately, that was not the case. We have had it fired up, and hopefully soon, will get it on the road.

I think we’re all a little curious: what kind of performance gain does an additional cylinder like this provide?

The third cylinder increases the engine by an additional 600 cc’s or 37 cubic inches. With that, it’ll be smoother running, and probably faster off the line, but the overall top speed would be limited by its standard 4-speed transmission. With a total of 1800 cc’s and 111 cubic inches available at a twist of the throttle, I’m sure she has the power and torque to pull a Mack truck.

The sound, although, is not like you would imagine. The best way for me to describe it is to compare a Triumph Triple to a Triumph Twin. A Triumph Triple sounds like a Maserati, and the twin more like a “thump-thump.” Bobby’s intention, however, was not to increase speed, or comfort for that matter, but rather to show his ability as an engine wizard, and ultimately, to turn heads.

This motorcycle will always be Bobby Labrie’s. I can’t really change it — don’t want to. I am only the present caretaker or caregiver.

A client in France left the door wide open for Walt Siegl when he asked the New Hampshire-based craftsman to build hi...

You are somewhat of an acting steward for these machines. I’ve grown up alongside their infectious sights and sounds and smells for as long as I can remember, but you’ve been at it for much longer. What is the role you like to play in the life of a vintage motorcycle, particularly this one from Bobby?

No truer words have been spoken, as to being an acting steward on this motorcycle and the many others that have come through the doors for the past 35-40 years. My start in this world of motorcycles was my first ride, probably eight-plus years old, on the back of a Vespa scooter. It has been ingrained in my mind to this day! That passion has bloomed into a furious fire!

This motorcycle will always be Bobby Labrie’s. I can’t really change it – don’t want to. I am only the present caretaker or caregiver. It is a personal project to show respect to the builder. When we first acquired the machine, which was a few years ago now, it sat in the corner of a garage, covered with blankets, dust, and dirt, and was missing the borrowed front end, along with many other bits. We wanted to get it back on its feet, so to speak, as it was just a chassis and engine.

We tried a couple front ends, but nothing gave the clearance we needed until we got the Wideglide on it. Kicking it over isn’t an easy task. On approximately every third kick, it’ll stand you up. Compression is a wonderful thing; if it kicks back, you’re a goner! It does have electric start, but there are issues with it, and that’s the next trip we’ll take to make it better. The times we have fired it up, we use a roller starter, like what the racers use in the pits these days. At some point, we’ll have it out at shows and AMCA (Antique Motorcycle Club of America) events, but especially local swap meets and shows as this is where it was born and bred.

How about some closure? Thirty-plus years later, what would Bobby have to say?

My feeling is that Bobby is smiling today to see that the mystery is still a mystery, and that interest remains in his creation. It’s exciting for me, and I’m sure it would have been for Bobby as well, to see so many years later, his mechanical marvel back in print. 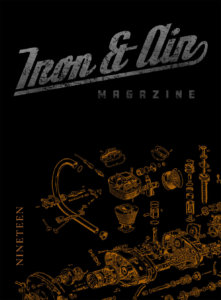