Automobiles The Great Race of 1908: 69 days and 13,000 Miles of MayhemSix cars and 17 men attempted the dangerous journey from New York City to Paris, France.

On February 12th, 1908, 250,000 people descended upon Times Square to witness the start of what would become known simply as “The Great Race.” Six cars containing seventeen men representing four countries began a race in New York City with their sites set on the finish line at the Eiffel Tower in Paris, France. It was called “the most fantastic, grueling, strenuous test ever devised for man and machine.”

The planned route would take them west across the United States to Seattle. From there they would ship the cars to Valdez, Alaska, cross what they hoped would be a frozen Bering Strait, and continue on through Siberia to Moscow, St. Petersburg, Berlin, and finally, to Paris.

This was a time when there were very few roads, no gas stations, and horse-drawn carriages were considered the more reliable form of transportation. Only nine cross-country treks had taken place in the United States to that point — none in winter — and no one had ever driven across Siberia. As the grandson of one of the racers said, “Most everyone agreed, none of the cars would get past Chicago. It was like a race to the moon.”

Within the first 100 miles, one of the three French cars dropped out with a broken differential, and a second French vehicle with mechanical problems ended its race in Iowa. The four remaining teams — German, Italian, American, and French — raced on to the west coast. The Americans had built a large lead and were the first to have their car shipped to Alaska. When they reached Valdez in early April (with the first car Alaskans had ever seen), an investigation of the Valdez-Fairbanks Trail revealed that the drive across the frozen Bering Strait was impossible. Race organizers in Paris abandoned the idea, ordered the Americans to sail back to Seattle, and sent all of the teams across the Pacific to Russia.

That car was the 1907 Thomas Flyer, a 60-hp, 4-cylinder, 4-speed specially built road warrior. It was outfitted with six tanks that held 176 gallons of fuel, running boards that could be removed and used for traction, and a heavy-duty reinforced chassis — but lacked a heater and a windshield.

Although it was never run again, The Great Race proved the reliability of automobiles and sparked road design and construction, leaving an indelible mark upon the modern world.

Most everyone agreed, none of the cars would get past Chicago. It was like a race to the moon. 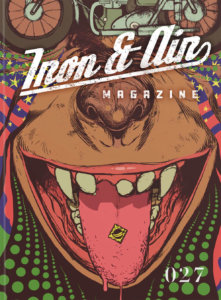