Gear The Humble Shop Rag Carries a History Worth WearingThe Godspeed Co.'s Shop Rag Shirt is a product loaded with history that was an uphill battle to create.

Chris Logsdon stands in an old textile factory on Alden Street in Fall River, Massachusetts. Large shafts of afternoon light stripe the worn wooden floor stretched out before him. The room is expansive, and nearly empty. It has an echo to it, like it’s waiting to turn even the slightest stirring into permission to clamor back to life.

The place is historic, and impressive, and although it’s not completely abandoned, the majority of the industry that used to thrive here has been. Once considered the textile capital of the world, Fall River is like so many industry towns in America – just holding on. It’s here among the dormant machines and drifting dust particles that Chris voices an important decision.

“This is where I have to make this shirt. It belongs here.”

The words echo back.

He is speaking of the Shop Rag Shirt, a project that began as a simple idea and evolved into a journey. Five years in the making, the idea would transform the common shop rag into a truly uncommon work shirt. The journey would lead Chris from one unexpected challenge to the next, through a century of history, and land him here, in this New England town on the edge of the Atlantic seaboard.

At times it felt like I was destined to find this place,” he recalls. “So many, seemingly unrelated events kept pointing me here.”

Standing in the historic Flint Mills factory, its oversized casement windows magnifying the glow of the waning sun, Chris proudly claims this building, and this town, as the home of the Shop Rag Shirt. For him it’s not really a choice. It’s destiny, on some small scale, bringing things full circle. Not because this project can somehow restore the town to its manufacturing glory, but because the shop rag, that ubiquitous crimson square tucked into back pockets in every garage, factory and workshop the world over, has origins right here in Fall River.

His first trip up the scenic Merritt Parkway toward Massachusetts was in a whir of late morning traffic, splitting lanes and grabbing glimpses of the shoreline astride his Triumph. A self-proclaimed junkie of all things moto, Chris founded The Godspeed Co. as an outlet for that obsession, and hoped this project could be its first proper venture.

“I was expecting to just pull up a Wiki page detailing the history. I found nothing,” Chris says of the initial research. “I just wanted to know the real story behind the rag.”

To that end, he was racing towards a town he only knew of in name, in chase of a term he’d only heard in passing.

At times it felt like I was destined to find this place. So many, seemingly unrelated events kept pointing me here.

Deconstructing the shop rag had become an obsession. Having determined its defining characteristics – the fabric, the color, and the finished “Merrowed” edge – he worked with menswear designer Allan Glanfield to ensure each of those aspects played an integral role in the plans for a thoughtfully styled work shirt. The collaboration would lead to Allan coming aboard as a partner.

“I was intrigued by the idea,” Allan remembers. “But it seemed like we we’re traveling down an unmarked path, with no clear directions. Not knowing what was in store is exactly what made me want to be a part of it and join the company.”

The obvious next step was finding the machine that stitched that distinctive edge. Despite the rag being almost universally available, that all-important feature proved elusive. No single manufacturer made the rag, and yet at the same time everyone made it. Just not here. They were told no one in America could replicate that stitch.

The term pointed them to the Merrow Sewing Machine Company, and to the Massachusetts town once proudly known as “Spindle City.” There they would find the very edge Chris had rolled through his fingers years earlier when he stared at a shop rag wondering, “Who invented this. And why?” Discovering the original machine that made that over-locking stitch would prove to breathe new life into the project, and in many ways instill it with greater meaning.

“Charlie Merrow, who runs the company with his brother Owen, told me he knew the machine I was talking about. Yes, they had invented it. Yes, they make it to this day,” Chris remembers. “He basically told me yes. For the first time in the entire process someone told me, yes, I want to help you make this shirt. That someone was Charlie, God bless him.”

The larger story that would introduce itself through the rag’s ties to Fall River is really that of the industrial revolution, and of a working class that built a nation on ingenuity, hard work, and a willingness to roll up sleeves and get dirty. For a throw away scrap of fabric, the shop rag ­– as an object – seems to stand for something far greater than grease stains and oil changes. Mention of it can call up all sorts of associations, and lead to some personal connection, or at least a fondly told tale of craft and workmanship.

“Every time I got out the rag it seem to conjure up something for people – times spent with your dad or grandfather, whoever, working in the garage, under the car, at the shop.”

If the story of the rag itself is one of nostalgia and symbolism, the story of the Shop Rag Shirt is one of laboring to capture that same spirit in a menswear garment, and perhaps more importantly, in the creation of it. Making a shirt based on the key characteristics of the rag would prove challenging enough. Making certain that the final product stayed 100% American-made, down to the last thread, would prove impractical, if near impossible.

“The challenge to create the shirt was only the beginning,” Allan says of the desire to keep the production stateside. “It became about changing the mindset. I don’t know anyone who wouldn’t be proud to wear goods made by the people in this country, but understanding that supporting American-made comes at a cost is an ongoing battle for the makers, craftsmen, and designers here.”

The eventual road to Fall River was far longer and more winding than that 300-mile straight shot up I-95 from NYC Chris made in a wash of wind, exhaust, and sea air. A shorter path, through Hong Kong, or India, or any overseas supplier would have been a breezy ride. Steadfast in their determination, Godspeed Co. took on the struggle to push for American alternatives, and ultimately uncovered a truly American story.

Looking out over the calm of the Flint Mills factory floor, the golden shapes growing longer, fading to shadow. The words of Charlie Merrow from one of those first meetings echo out as well.

Chris understood immediately that Charlie wasn’t speaking of the shirt in literal terms. He was speaking of the spirit of it. He was looking beyond the material, and the color, and the stitch, to something greater. To the story.

Any work shirt can capture time and events in the dirt smudged collars, frayed cuffs, and thread-bare elbows. The Shop Rag Shirt has a tale to tell well before you pull on the woven crimson fabric and thumb at the smooth brass buttons. The best part, the thing that makes the idea worthwhile and the journey to create it meaningful, is that the story continues.

And the next chapter is yours. 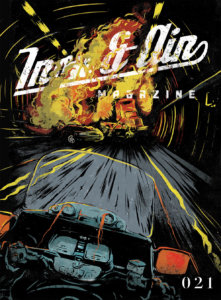