Andy and Stef drop their stage names as we talk, sitting in lawn chairs in the parking lot of a Salt Lake City music venue. Andy is best known as Astronautalis, Stef as P.O.S., and together they are Four Fists, a brash hip-hop duo with a punk rock ethos.

We talk about their latest album, 6666, with Andy describing the workflow with Dutch producer Subp Yao in candid and unpretentious detail. The record touches on individual growth, responsibility, and the craving for freedom — universal issues we can all sympathize with, which is probably why Four Fists attracts a diverse, colorful fan base of sneakerheads, fashionistas, stoners, oily motorcyclists, and kids with regrettable face tattoos.

We listen as Andy and Stef chat about the record and the roller coaster of long-distance collaboration, and soon the conversation steers toward one of the most unique aspects of Four Fists: its intimate connection to custom motorcycle culture.

ANDY: It reminds me of skateboard culture. I grew up skateboarding, and what was really cool to me was that skateboarding was this culturally, stylistically blank canvas; it was cool to be diverse and listen to Three 6 Mafia and Modest Mouse. The thing that’s been really interesting in the motorcycle communities I’ve found the people who are just into all of it. That feels like the skateboard culture that I grew up with. Both [Stef] and I grew up in that culture and honestly that’s what made my music and my cultural interests so diverse. It wasn’t cool to just be punk or to just be hip-hop; it was cool to be a skateboarder and be into all of it.

STEF: Yeah, especially in our era of skateboarding. The only time you’d ever hear hip-hop music aside from rap videos was in skate videos. You’d hear Dinosaur Jr. and Built to Spill, and then a bunch of rap music. It was just like that.

A: I feel like all of those kids — all of us are in our 30s — and we can’t skateboard anymore because that’s a fucking terrible idea, and now we have a little bit more money. We all stopped riding our fixed gears, and then we all got motorcycles. And that’s the thing that’s welled all of that up in me that I had forgotten, that high school excitement about a thing, a culture …

A: What’s really funny is after having ridden really long distances and having camped off my Harley [Street Bob], now I want to get dirt bikes and rip along railroad tracks and do the things that [Stef] has been doing. Donuts in a park in the middle of the night is exactly what I want to be doing right now.

S: That’s been my thing the whole time: little rippers.

IRON & AIR: What are your thoughts on freedom and motorcycles?

S: I’ve been a black guy on the outskirts of motorcycle culture my entire life. I’m supposed to have a dumb, stretched-out sport bike, with one big wheel and some hot-colored leather and be fully decked-out in Icon gear, because where are the other representations of black people in this at all? That’s never been me. I find all of my freedom in doing exactly what it is that I want to do at the very limits of my responsibility. I feel like there are far too many rules. I want to do everything I can possibly do without hurting anybody else. I feel like freedom has to be relative to the person next to you. You’ve got to be respectful of everybody’s right to exist.

A: I think freedom stretches and shrinks. You have moments when freedom is this big, wide-open thing surrounding you, which is why people on motorcycles talk about their bikes rapturously, almost religiously — like it’s this church that I ride around on that gives me this sense of freedom and euphoria, because freedom really stretches when you’re moving so fast that all these idiots can’t touch you. And then that freedom shrinks when it’s April 10 and you have to do your taxes, and you haven’t done any of your paperwork, and you can’t ride your motorcycle for a while. There was a time in my life when I thought I wanted to be famous, and there was a time in my life when I thought I wanted to be rich, and once I let go of both of those things it became about just wanting to be happy. I want to be able to continue to make and do all the shit I want and continue to be happy with all the people around me, and ultimately that’s the freedom: to be able to sit and say, “We have a year to make this record, and make whatever kind of record we want,” and then drive around the country and yell that record at people.

And then when that drive is done, I’m going to go into my bike shop and work on my motorcycles for a month. Then we go to Europe and yell this record at people. It’s really hard to get better than that. We’re in the 1% of free-living at this point.

I&A: On 6666, you hear this recurring idea that you get to make your life your own and that nobody else is going to do this for you. Can you speak to that?

A: I’m gonna take the long way around here. I have this Harley, and it’s beautiful: big and shiny and glowing. In the first month, I hit a gravel patch and dropped it, and put a big dent in the tank. Riding around with other Harley dudes, most of them were like, “Oh, see you dropped the bike there. You gonna get that fixed?”

Then I met Josh Kurpius, the photographer, and I was like, “Man, I don’t know . . . I think I have to get that fixed,” and he said, “Never get that fixed. Don’t ever get that dent fixed. That’s your bike now.” I really liked that idea; I really latched on to it. We want the dents, we want the fun. I don’t ever want to own a thing that’s going to stress me out so bad when I get a dent in it. A Porsche is not in the cards for me, man. The Harley is the nicest thing I own and it is fucking torn up. I can’t wait to make it into some kind of rat bike.

S: Honestly, that’s how it should be.

I&A: Are there any parts of motorcycle culture you’d advocate for?

A: What’s cool to me is that there’s a bunch of people that are like us, who are into all of it. Dudes like Jeff Wright from Church of Choppers. He’s such an inspiration. The way he looks at street bikes, dirt bikes, Sportsters — he thinks about converging them all. It’s such a punk approach to bike building, to bike riding. He just wants to make the coolest shit he can with the coolest people. 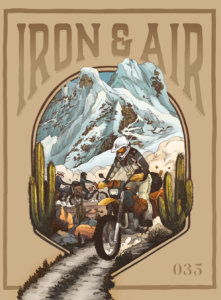