The Evolution of Drag Bikes & Top Fuel MotorcyclesToday’s Top Fuel bikes can go from zero to 100 mph in a little over one second. 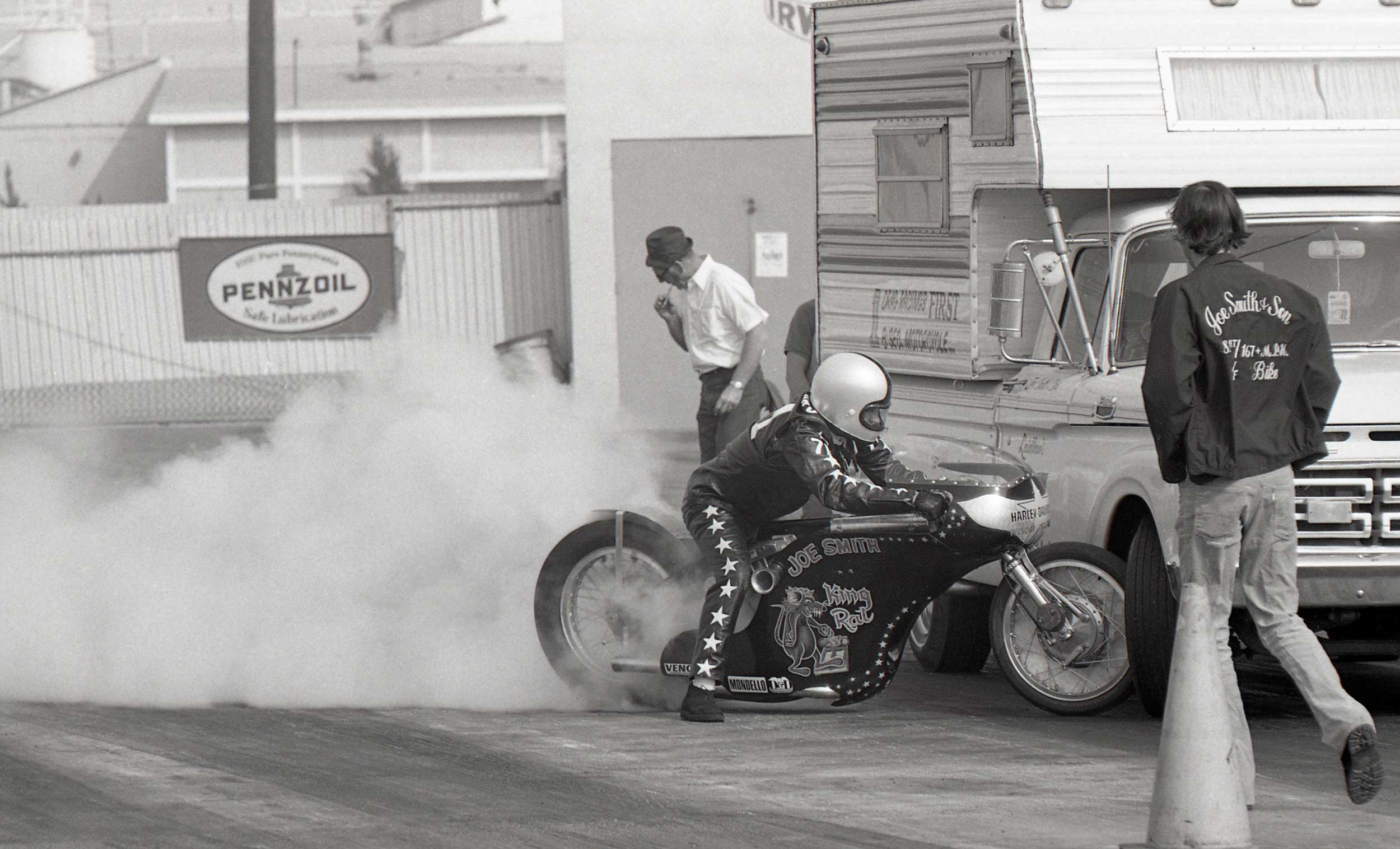 A drag bike is a feast for the eyes but an assault on your other senses. That savage sound. The pungent smell. Tremendous vibrations that shake free from the bike and rattle your core. It captures your attention with its beautiful, low-slung silhouette and elicits desire with unreal performance: today’s Top Fuel bikes go from zero to 100 mph in a little over one second, cover an eighth-mile in under four seconds, and consistently clear a whole quarter-mile in six or seven seconds at speeds well over 200 mph.

Organized drag racing started taking shape in the late 1940s and by the early ’50s began its maturation into the sport we know today. As old-school hot rods evolved, so too did drag bikes, and sitting in the staging lanes alongside gassers were motorcyclists like Pete Hill, Bud Hare, Clem Johnson, and Joe Smith — a few of the men who cast the mold for the drag bikes of today.

In the ’40s, Pete Hill and Joe Smith favored Knucklehead-powered Harley-Davidson drag bikes, while Clem Johnson raced a Vincent Rapide he dubbed the Barn Job, an aluminum-frame bike that is now among the most iconic dragsters. Starting with a 998cc engine rated at close to 45 horsepower, Clem worked and reworked the Vincent in his barn until its engine produced almost 10 times the power; he later added a Roots-type supercharger to push the Barn Job even further. Raced until 1991, Johnson’s Barn Job is one of the first true Top Fuel motorcycles, clocking its best quarter-mile time of 8.4 seconds at 187 mph with Jim Leineweber behind the bars. 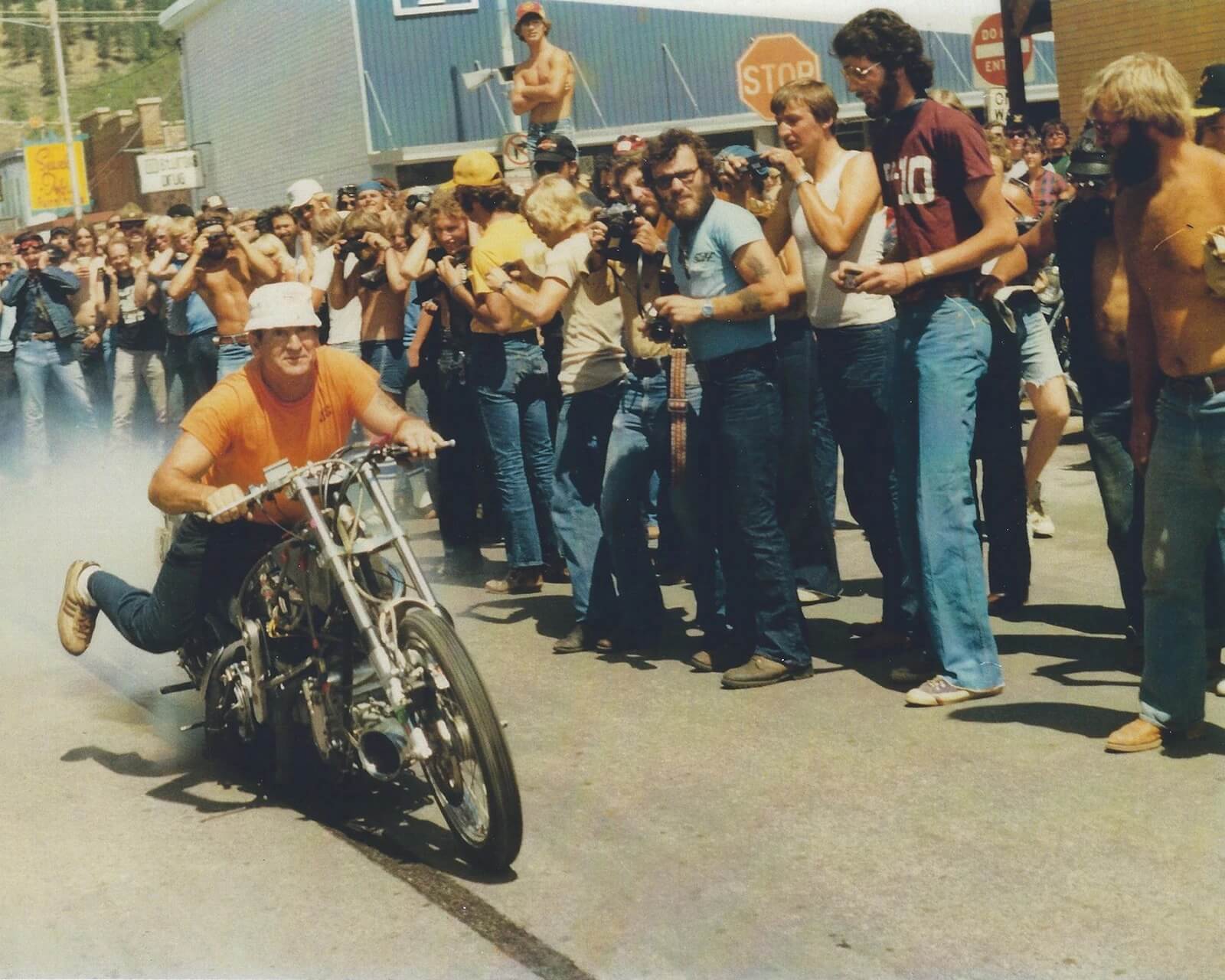 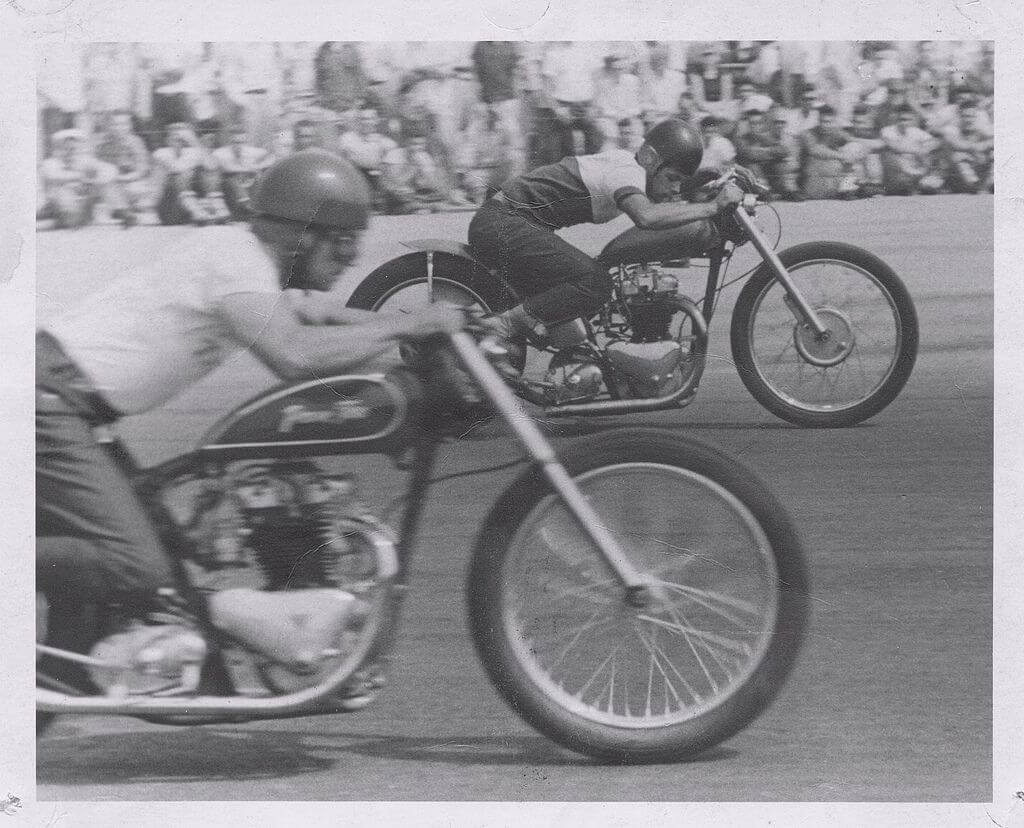 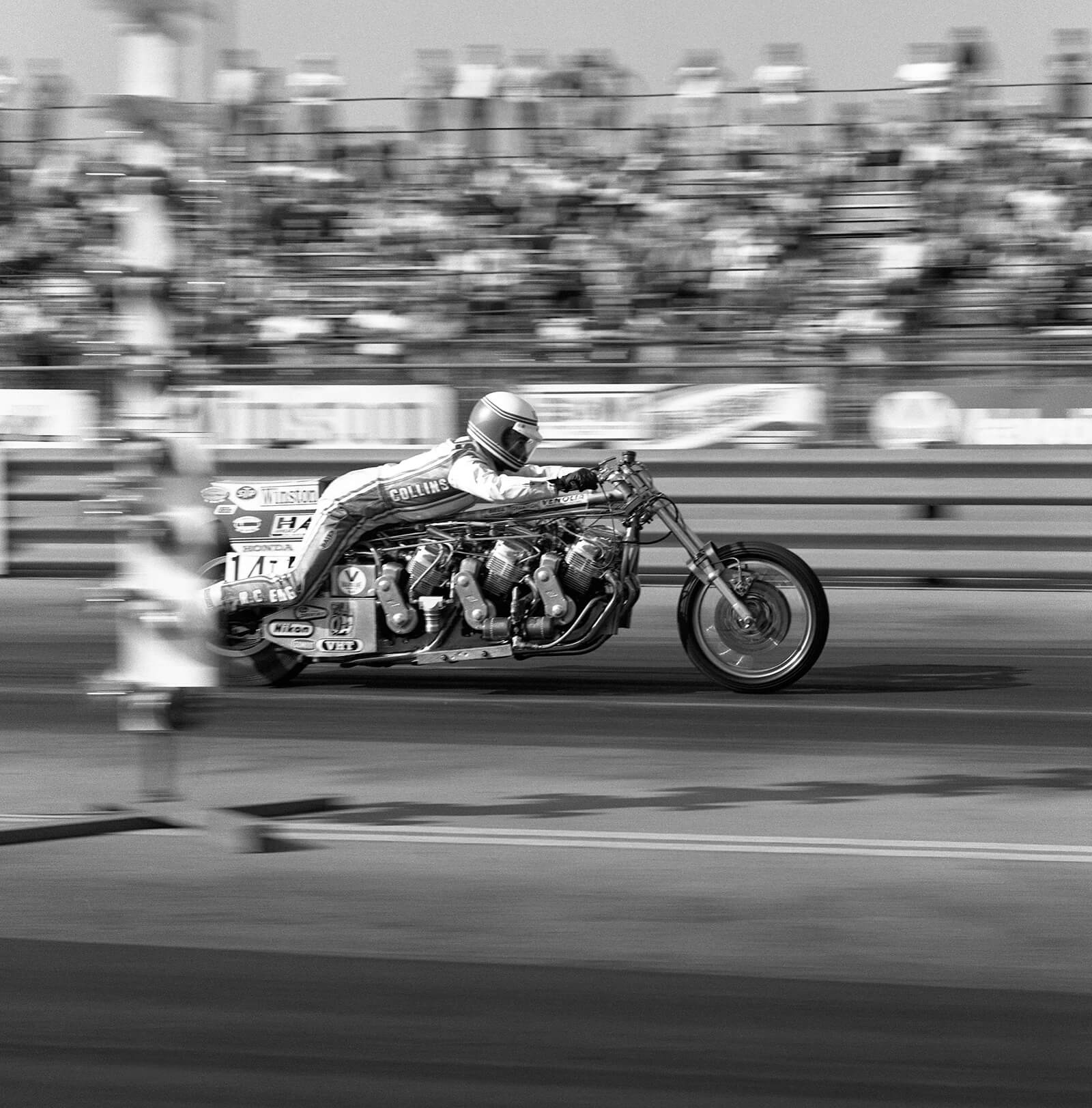 While Barn Job showed what could be accomplished with a single engine, racers began to wonder what they could do if they raced bikes with two engines. In 1956, SoCal drag racer Bud Hare put two 650cc Triumph engines into a scratch-built, stretched nine-inch chassis. He poured a mix of nitromethane and benzol into the fuel tank, and his bike — dubbed Dubble Trubble and piloted by Bob Thurston — went 142.38 mph at the Santa Ana drag strip. (Note: In the 1950s, all drag racing events were flag-start speed contests. The racer with the highest speed of the day won the whole event.)

Put a car tire at the rear, use a chrome moly chassis, and add fuel injection, and you have 12 cylinders of nitromethane-huffing mayhem...

Hare’s double-engine innovation set the stage for bigger, better things, like Russ Collins’ triple-engine Honda, named the Atchison, Topeka, Santa Fe after the well-known railway. The Top Fuel Honda used three highly modified 750cc engines, each punched out to displace about one liter. Put a car tire at the rear, use a chrome moly chassis, and add fuel injection, and you have 12 cylinders of nitromethane-huffing mayhem that, in 1973, blitzed down the strip in only seven seconds — a first for an NHRA Top Fuel motorcycle. Not surprisingly, multi-engine Top Fuel bikes became all the craze, but as the ’70s waned, blown single-engine bikes began to emerge as the dominant force in drag racing.

From 1978 to 1988, Pete Hill rolled up to the tree on a supercharged Knucklehead drag bike he nicknamed The Silver Bike. Starting with a V-twin rated at around 40 horsepower, Hill spent a decade tuning the bike’s engine until it produced something close to 400 horsepower, leading him to 51 race wins and 12 national records. Nevertheless, his supercharged V-twin had a hard time keeping up with the forced-induction four-cylinder Japanese bikes that were on the rise. 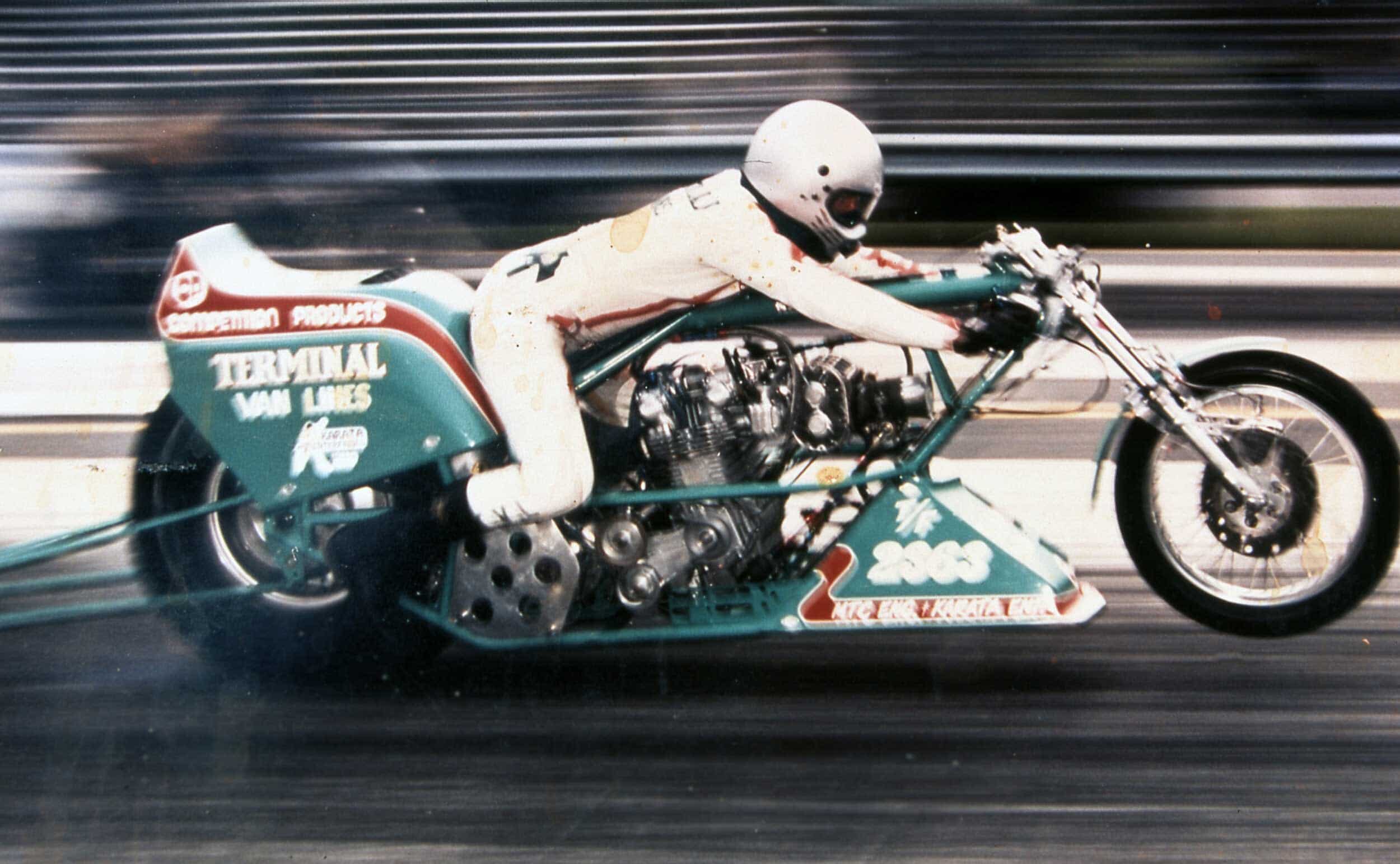 At the start of the 1980s, attention turned to the Terminal Van Lines (TVL) Kawasaki, which brought an end to the multi-engine era and paved the way for almost all future Top Fuel motorcycles. The first of its kind, the TVL drag bike used a reverse-mounted cylinder head so that the intake ports faced forward, flooding the supercharger with the incoming air. The TVL bike also featured a removable horizontal frame rail that attached to side motor mount plates, allowing the engine to move six inches fore and aft and four inches up and down so the team could locate the “sweet spot” for weight balance. The crew’s innovations worked wonders; in 1980, at the NHRA Winston World Finals, rider Bo O’Brochta stunned everyone with a 7.08-second elapsed time, nearly a half-second quicker than anyone else. Today, just about every inline-four Top Fuel motorcycle uses a reverse-mounted cylinder head and side-rail-attached engine plates.

The first of its kind, the TVL drag bike used a reverse-mounted cylinder head so that the intake ports faced forward, flooding the supercharger with the incoming air.

Many drag racers over several decades contributed to the evolution of these amazing machines for the modern era of drag racing, but Elmer Trett is the one who brought it all together, pushed the envelope even further, and went faster than anyone else. During the ’83 NHRA US Nationals, Trett became the first person to reach 200 mph on a Top Fuel motorcycle in competition. In 1996 he pushed even further, reaching 235 mph during a wicked, six-seconds-flat pass. In October 1999, a few years after Trett’s untimely death, his understudy, Larry “Spiderman” McBride, ran the first five-second elapsed time in the history of drag racing.

There’s no telling what level of performance drag bikes may achieve in the next decade or so. If today’s bikes can reach 255 mph in less than six seconds, will the dragsters of tomorrow be able to crest 300 mph, like Top Fuel cars do? If (or when) that incredible day comes, fans and racers alike can thank their forebears for challenging the norms, innovating with abandon, and championing one of the coolest sports there is. 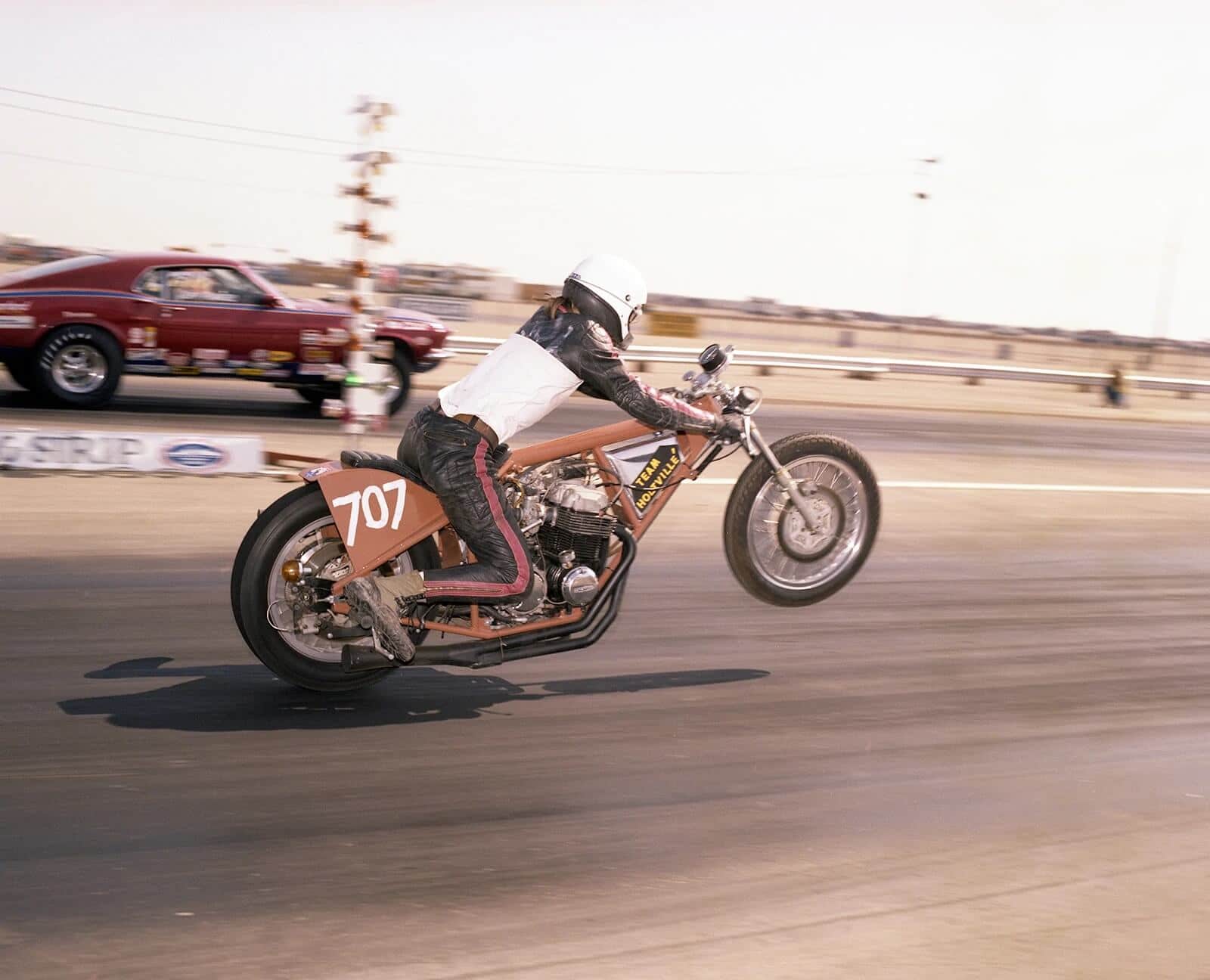 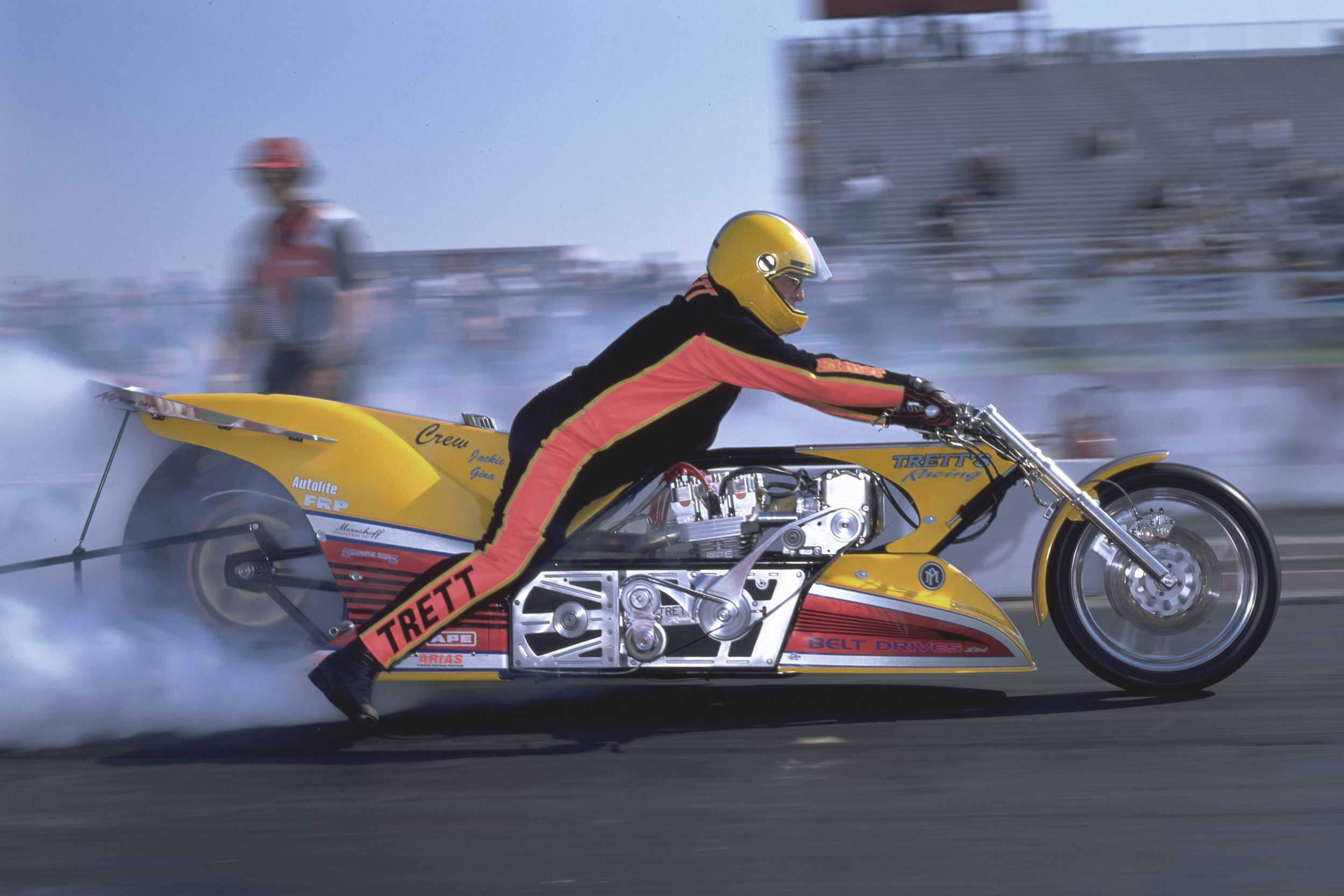