Motorcycles The Story Behind David Aldana’s Legendary Skeleton LeathersDavid Aldana's riding style and unique sense of fashion made him a larger-than-life motorcycle racer and showman.

When David Aldana walked out onto the track for the 1975 AMA season opener in Houston, he wore a black set of racing leathers, its front emblazoned with a skeleton in white. He was a specter — a memento mori painting come to life.

Elvis. Evel Knievel. Liberace. They all constructed garments that made them larger than life. Aldana joined those whose attire became synonymous with their identity. Like Superman, the suit transformed the wearer into a force with seemingly supernatural power; without it, he was a mere mortal.

Aldana became one of the most beloved riders in the country after getting his start on the dirt flat tracks of southern California. Fans loved him for his showmanship and devil-may-care, go-for-broke riding style, where he was just as likely to crash as win. “If you don’t fall off now and then, you don’t know how fast you can go,” he claimed.

In 1975, Aldana rode for Norton, which was going through financial difficulties and had to drop support for the American racing team. Free from the constraints of having to fly the flag for any company, Aldana had a set of leathers made for the sole purpose of amusing himself — and sticking a finger in the eye of the American Motorcyclist Association.

He was a specter — a memento mori painting come to life.

At the time, the AMA was trying to distance motorcycling from the image of the outlaw biker that had come to prominence in the 1950s and ’60s due to films like The Wild Ones and books like Hunter S. Thompson’s Hell’s Angels. Riders were forbidden to wear the solid black leathers that were associated with that biker look unless they featured a highly contrasting color. Aldana complied with the rule (if not its spirit) by having Bates Leathers sew a skeleton to the front of his solid black suit, which only added to its audaciousness.

One can imagine the sight of the ghostly visage careening through corners for the first time. With a sport as dangerous as motorcycle racing, to present a figure so macabre was to thumb a nose at death itself.

These days the suit has taken on a life of its own. Aldana still wears the leathers when competing in vintage races, because that is what the fans expect to see. For better or worse, he cannot escape this thing that he has made. It envelops, protects — and at times, overshadows — the man and the accomplished racer who is forever bound to live inside it. 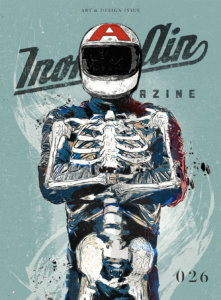