Earl Teter must have looked like death when they found him on that highway. He’d dragged himself up out of Cicero Creek, leaving what was left of his car hissing in the water after the two of them went ass over tea kettle down an embankment. Burnt and soaked through with mud and blood, he was crawling on all fours down the middle of Indiana 32, his ears still ringing with the concussion, when a neighbor picked him up and drove him to the hospital. Later, he’d tell the world that was the day that he made up his mind: He was going to be America’s first stunt driver.

He could have been anything. Born in 1902 just north of Indianapolis, he grew up gregarious. A natural athlete who knew how to put on a show, he was class president three years running, captain of his basketball team, and an AAU junior welterweight boxing champ — the kind of guy people want to be or be with, anointed with that fleeting invulnerability unique to certain young men.

He was working at a gas station in Ashland, Ohio, in ‘32, selling homemade car polish at county fairs on the side when he got his shot: a promoter offered him $300 to roll a car for the crowd. Not knowing any better, he ran the machine up to 60 miles per hour and cut the wheel hard. The resulting somersault sent parts flying, sheared his lap belt, and earned him a ride in an ambulance. It also drew headlines, and when he repeated the stunt in Mansfield, Ohio, to similar attention, he realized he could make a living putting cars in the air.

He hired a crew of eight, including a mechanic, and joined the fair circuit as Lucky Teter and the Hell Drivers, with a fleet of yellow Plymouths. In those first years, they traveled across the U.S. and Canada, and as word of Teter’s exploits grew, so did his enterprise. He was constantly designing and testing new stunts, and created staples of the daredevil industry in the process. He perfected launching a car from one ramp to another, eventually working up to leaping over a line of eight other vehicles. Grainy black and whites show him sailing through the air over a Greyhound bus, his hulking frame filling the window in front of a full grandstand. He worked out how to drive a car on two wheels, and shocked onlookers as he blitzed through a wall of fire.

Early on, the Hell Drivers added motorcycle stunts to the program, with riders performing the same feats as Teter in the Plymouths. Bikes jumping three other bikes at 70 miles per hour. Riders gunning it through burning boards or jumping across bonfires. The Hell Drivers were writing the playbook that would make “Evel” a household name 30 years later. They made records, then broke them, and broke them again.

Teter never suffered serious injury. He was an early proponent of the seatbelt, and spent a fair portion of his show demonstrating how belts could save lives, even performing a few head-on collisions to get the point across.

By 1942, the Hell Drivers were performing 100 shows a year in front of an estimated 1.5 million people. He was the world’s foremost stuntman, performing in films and speaking to crowds on the importance of traffic safety. But while Teter was busy dreaming up ever more thrilling stunts, the world was unravelling; Axis powers were beating on England’s door, and America was at war.

The car arced high, and for a moment, it looked like he’d made it, laughing at physics and his own mortality.

On July 5, Teter and the Hell Drivers were performing during an Army benefit at the Indiana State Fair. He was gunning for one of his own records, aiming to jump his ‘38 Plymouth 150 feet over a transport truck. It’s hard to imagine what was on his mind at the time. He was nearly 40 years old, and he’d watched most of his young drivers head off to fight, never to return. Was he sitting there with sweat in his eyes, worried about the next jump? The next job? The growing, unstoppable menace in Germany? Or was he focused on just how far away that other ramp seemed to be?

That Plymouth took to the air the way it always did, leaving the ground at 65 miles per hour. The car arced high, and for a moment, it looked like he’d made it, laughing at physics and his own mortality. But it didn’t last, and the car came down short, crashing headlong into the second ramp.

He didn’t come crawling from the wreckage that time. Earl “Lucky” Teter died that day in the back of an ambulance, just a stone’s throw from his childhood home in Noblesville, Indiana. 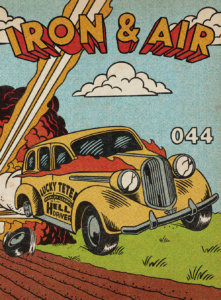