How did someone like me, who has no experience riding off-road or racing motorcycles, end up on the starting line of the grueling Mint 400 off-road desert race? It began with my friend Tony Parent, who has a successful fencing business and spends his weekends behind the handlebars with his team of hooligan racers, Allied Racing. When Tony doesn’t have time to haul bikes to races himself, he asks if I can do it for him. Tony had asked me to truck his 2021 Ducati Desert Sled race bike out to Primm, Nevada, and as I loaded his bike into my van, he threw his helmet and boots into the cab and said, “I won’t fly with these, because you may need them for the race.” I chuckled and responded, “I’ll see you there.”

On the 20-hour drive from central Texas, I considered the possibility of Tony being unable to make the race. Would I ride in his place? Would the rules even allow it? I have no business racing through the desert on a Ducati, but if the opportunity presented itself, I’d be a fool if I didn’t accept it. I figured that watching a few YouTube videos about the race would maybe ease my mind a bit, but it didn’t. I quickly discovered that this race was much bigger than the national “Hare and Hound” races that I was used to hauling bikes too. The Mint 400 is a full-on, televised off-road racing and industry event with countless classes for four- and two-wheeled machines. At that point, I was really hoping Tony would show up.

I felt under the weather by the time I arrived in Primm — a kitschy little town with three casinos, a mall, a giant roller coaster, and a McDonalds — so I self-medicated with a sixer of beer and a pack of cigarettes, figuring I wouldn’t have much to do until the race was over. Unsurprisingly, the next day I felt even worse as the Allied Racing team and I drove into Vegas to go through registration and tech inspection, which is when I found out that Tony wouldn’t be attending. Ducati tech Josh Newby said to Allied team member Jordan Graham, “Well, I guess we’ll just throw Colt on Tony’s bike.” Jordan responded, “Hell, why not?” That’s when I knew it was happening: I was going to race.

Immediately I traded in the beer and cigarettes for non-stop water and vitamin consumption. Registration went smoothly, but tech inspection was a wholly different story. Race officials had made recent changes to the rule book that took everyone by surprise. Many people were unable to pass on the first try, including me. The biggest change was the requirement of a Snell-approved helmet, which most racers didn’t have. Every motorcycle shop in Las Vegas sold out of Snell-approved helmets that day. Another requirement was to pack snacks with you in case you end up stranded for a while, which I was happy to oblige.

The morning of race day was dark and cold as we made our way from the local casino hotel. I layered up in overalls, a denim Wrangler pearl snap, and my straw cowboy hat, and headed to the pits. Not having any of my own riding gear, I threw on Tony’s slightly oversized helmet and boots. As we warmed up the bikes, racers were slowly making their way to the staging area. There were about 15 Hooligan bikes, five of which were Ducatis, and the rest were Harley-Davidsons —mostly Sportsters, except for one 650-pound Dyna. The Hooligan race was split into two different classes: Open and Pro. Since I was taking Tony’s place, I was in the Pro class and lined up beside two of the fastest riders out there: Jordan Graham and Mikey Hill. With everyone else racing in the open class, I realized that all I had to do was finish the race to get on the podium.

The race started on a motocross track in front of a large spectator area, and I was really nervous since I’d never ridden on a motocross track before. When the flag dropped, Jordan and Mikey took off like it was a drag race, sending it off the jumps. I knew I wouldn’t be seeing them again. As for me, I rolled out of there like I had all the time in the world, figuring it would be less embarrassing to go slow than crash in front of everyone. The motocross track was soft, deep, and really unenjoyable for my first few minutes on a quarter-ton Ducati that I’d never ridden outside of the pits. The track transitioned into a speed-restricted paved road before the actual desert course began, with two 58-mile laps ahead of me.

I took my first spill into the sand on a sharp 75-degree turn. The next challenge was mile after mile of whoops, which slowly started to wear me down, and I hated every moment of it.

When I rolled into the remote pit, 30 miles from the start line, I was in high spirits. The Desert Sled was making easy work of this terrain. I gassed up, borrowed a beanie to improve the fit of that oversized helmet, and was back on my way. The course became far more challenging, and I took my first spill into the sand on a sharp 75-degree turn. The next challenge was mile after mile of whoops, which slowly started to wear me down, and I hated every moment of it. Eventually, there were quick sections that were much easier to ride, and I learned to utilize those times to have a drink from my hydration pack and relax my arms and grip. Other riders blew past me but I didn’t care, because I just wanted to ensure I had the energy to finish.

The course gradually got rockier and eventually turned into a single-track trail. As I rode down a ravine, the opposite side was steeper and higher, so I laid on the throttle and made it up the other side, but then veered off the trail and slammed my front tire straight into a yucca. The abrupt impact made my front wheel come up in the air, and the clutch side of the bike slammed onto a rock. When I picked up the bike, I noticed my right-side peg was sheared off and the brake pedal was bent in. I had just enough of the peg mount left to rest my toe on, but there was no way I would be able to stand up on the bike again, and the most technical part of the course was just ahead of me.

Several hours later I rolled into the home pit and installed a new peg. While I felt good that I had completed one lap, the second lap was going to be even more challenging. Due to rider traffic, the sand and ruts were much deeper than they were on the first lap, and my stamina was fast declining. “Slow and steady wins the race,” I told myself. After a few more low-speed spills, I was getting really tired of picking up the heavy Duc, so riding breaks were now very necessary, and those snacks came in pretty handy after all.

As the course became increasingly technical, I rarely looked more than a few feet ahead of my front tire. As I climbed a steep hill on a narrow trail that was loose and rocky, I realized that a dirt bike was laid over just in front of me with a broken rear wheel. I tried to steer my way around the bike and its rider without going off the side of the hill, but I failed to keep enough momentum and had to come to a full stop to avoid crashing. I was on a hill with a countering slope, completely off the trail, so starting again was going to be very difficult. As I assessed the situation, I realized that there were two other riders who had done just as I did. One of them was my friend Carlos Sanchez on a 1970s Harley-Davidson Ironhead Sportster. He had tried to take a different route around this mess and ended up getting stuck off to the side. Ahead of him was a man with a dirt bike on top of him, trying to get free. Exhausted, we all struggled to help each other and eventually, all made it to the top of the hill.

The ride down wasn’t much better: loose, rocky, and steep. The three of us were riding in a single-file line when the man on the dirt bike ended up in the same situation that I first found him in. Being in the middle of the pack, I got off my bike to help him, and as I started to lift the bike off of him, I realized that he was an amputee. I helped him get back on his bike, but within minutes, he fell again. It was a very difficult portion of the course, especially for this man, so we found a place where he could rest for a while. There was a checkpoint a few miles ahead and I knew he wasn’t far from help if he needed it, so Carlos and I said goodbye and started for the finish line.

It was late afternoon, and my concerns had shifted from finishing the race to just getting my ass back home in one piece, so I picked up the pace. Having Carlos close behind me helped my motivation; I’d never live it down if he passed my brand-new Ducati on his vintage Harley. In the back of my mind, I knew I was one crash away from being stuck in a pitch-black, freezing-cold desert, waiting for a rescue crew to make their way to my GPS location. Grip fatigue and back pain meant my body was in constant discomfort, but I had to stay focused, and soon I saw glittering buildings far in the distance.

The strange town of Primm never looked so good. As I rolled through the main pit, people cheered racers along. I carefully made my way back through the motocross track and over the finish line, completing almost 120 miles in a little less than seven hours. With a dust-covered smile on my face, I said to myself, “Never again.” 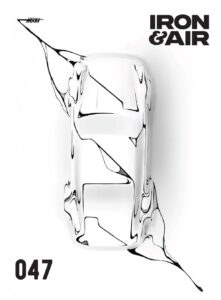