Motorcycles This BSA ThunderBolt Flat-Tracker is a Carefully Designed Rule-BreakerZoé David ignored a lot of unsolicited advice to ensure her latest custom motorcycle was suitable for the road and the flat track.

Zoé David built her first motorcycle five years ago after a boy broke her heart. “One day my boyfriend dropped me, like a shit,” says David. “I decided to find a bike … I don’t know why. I wanted to make something new. I didn’t have a lot of money, so I bought a 1951 Terrot MT1 that didn’t work and made it run. Then it was like a drug.”

The 24-year-old architecture student from Normandy, France, fell deeply and madly in love with motorcycles, and in short order built a 150cc ’54 Peugeot 155 and a 100cc ’90 Honda Win, which she took on an eight-month solo ride around Vietnam. “This kind of thing, I didn’t even think of five years ago,” says David. “I think that something…I don’t know…happened in my mind, and now I understand that I have only one life and have to live it completely. I have to do what I want, and motorcycles help me do what I want. It’s completely mad, these sensations, and I think too many people don’t really live.”

She recently finished her fourth build, a ’69 BSA Thunderbolt with an A65 parallel-twin engine. In its day, the air-cooled 654cc ton-up bike competed with Triumph Bonneville and followed the Bonnie’s lead when it switched to a unitized powertrain. But the Thunderbolt struggled to sell well, and things got worse in the early ’70s when BSA pivoted to an oil-in-frame design. By 1973, the Thunderbolt — and the BSA brand — had disappeared. Late-model Thunderbolts are now sought after by oddball collectors, which preoccupied David before she started her build. “I wanted to use only BSA A65 parts, but changed my mind. I decided I have a lot of parts I can do whatever I want with, because why can’t you touch something? The bike has parts from here and there; I did whatever I wanted.”

David’s BSA isn’t some hodgepodge of binned parts but a carefully designed, intricately detailed reformation of the Thunderbolt. “I think the details make the difference,” says David. “All the screws are important…not too long a screw, not too big a hole. There are a lot of things like that on my bike.” David considered every inch of her BSA, choosing where to restore and where to reimagine. She got some flak for chopping the frame to make it look more like a Trackmaster BSA racing frame. “The rear of the Trackmaster frame is really smart. I love it,” says David. “I thought I could easily do the same — you’re just cutting and making a tail. I said, ‘Why don’t I do that?’ I mean, I can do anything I want.”

David is irreverent and bullish about every aspect of her bike, from the sharp pinstriping on the tank to the tidy welds on the exhaust pipes, both done pro bono by friends. She says, “It’s hard for me to talk about my bike because I love everything.” Ask her why she’s running a tachometer from a ’51 Norton Commando, and she’ll tell you, “Because someone gave it to me.” Ask why she’s running matched 19-inch wheels, and she’ll say that six months ago she started racing it in flat track.

“Everybody said to me, ‘Don’t do that! You will kill your bike! Flat track, it’s dirt. You can’t put this beautiful bike in dirt,’” she says. “But I made it for riding. I didn’t make it for watching. My first race was Wheels & Waves in France, and I qualified. Second race, I fell down because I went too fast. And then at Dirt Quake in the UK, I won.”

An inconspicuous heartbreaker born of heartbreak, this Thunderbolt has an intrinsic charm thanks to an equally charming builder who refused to hold back as she poured herself into the build. “If I could be a bike, I think I would be my BSA,” says David. “The bike has two sides: the road bike and the flat track bike, just like I have my architect side and my mechanic side.” 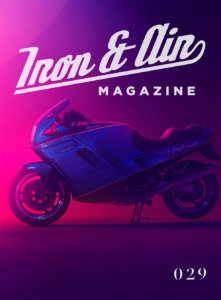