There are over 3,000 stories on Bike EXIF’s website, with new posts added daily, and digging through the archives is as entertaining as it is eye-opening. When Bike EXIF launched, the modern custom motorcycling world looked nothing like it does today, and typically the first featured builds were simplistic and cringingly unattractive when compared with the outrageously reimagined and impressively detailed machines of today. Still, we wouldn’t be here without those earliest efforts that helped inspire a new generation of builders, and a few of those bikes turned out to be groundbreaking, timeless motorcycles that we never stopped fawning over. In this story, we pull some of our favorite customs from the past decade of Bike EXIF and present them in chronological order, with commentary from founder Chris Hunter and the site’s readers.

Over the course of a year, builder Ian Barry of Falcon Motorcycles worked alongside a six-man team to assemble this beautiful 1952 Vincent Black Shadow. Sitting in the Black Falcon’s scratch-built frame is a blueprinted engine that produces 75 horsepower, and Barry himself fabricated the powerful, double-sided, four-leading-shoe front brakes to “actually stop the Black from its 140-plus miles per hour potential.” He also hand-formed two aluminum gas tanks that “press-click” onto spring-loaded pins so the entire fuel system can be removed in under 30 seconds; seen here is the “Roadster” tank, which is intended for regular riding; there is also a smaller, one-gallon “Quarter Miler” for use at the drag strip.

“A website is only as good as its content, and Barry’s mesmerizing skills gave EXIF a major fillip in the early days,” says Hunter. “His Falcon series made me realize that new releases from major builders could trigger a torrent of traffic from social media.”

“If you can’t find something to love about this, you have no heart. This is absolutely breathtaking.”—Ron Heerkens Jr.

“Timeless” is a word that gets bandied around too often, but it perfectly fits this lovely machine that looks modern yet classic, without being faddishly retro. Siegl’s Leggero series is a limited run of production machines based on two-valve Ducati 900cc engines that are rebuilt and blueprinted by legendary technician Bruce Meyers, who adds big-bore kits and ported and flowed cylinder heads. Siegl reduces weight by using magnesium wheels, Kevlar bodywork, and 4130 chrome-moly steel tubing for the frames, which weigh only 19 pounds.

“I have a mental list of the bikes I’d buy if I won the lottery,” Hunter says. “It’s a very short list and it changes frequently, but a Walt Siegl-built Leggero has been on it for the past six years. When you commission a custom build, to some extent you’re buying into the ethos and history of the builder, and Walt is a guy I’ve looked up to for a long time.”

“When I saw this feature I thought ‘nice bikes.’ Then, just now, I was waiting for my coffee when a Leggero pulled up at the light outside. I tried to compute what I was looking at for a few seconds, then the penny dropped and I ran outside and stood on the curb just staring. I probably looked like I’d had a stroke. Literally a stunning bike. And the sound it makes. Sweet baby Jesus. I now have a mission to be able to afford one for myself.”—Jon Mepham

While Magpul Industries is best known for manufacturing high-tech composite firearms, they wowed the motorcycling world with the release of their Ronin series, a limited run of 47 highly customized bikes based on the Buell 1125. To keep the notoriously finicky Rotax engine from overheating, Magpul designed a new front end with a high-flow, single-core radiator mounted to the nose and connected to an overflow tank hidden inside the left fork leg. A unique cast-aluminum front suspension gives the Ronin a distinctive, hunched-forward look. The belly-mounted muffler is ceramic-coated to protect it from debris, and a single cast aluminum unit integrates the pegs, the battery box, and an adjustable idler pulley.

“I loved the sheer audacity of this venture, from the samurai concept to the mil-spec execution,” says Hunter. “The early black bikes look like Batman props, but some of the later builds had truly retina-searing paint jobs. If more companies had a vision like Magpul Industries, they’d clean up.”

“If I was in the income bracket where dropping $40k on a bike was feasible, I’d be sad they made 47 of these — because it looks like a real, one-of-a-kind custom. But I would buy it anyway.”—jlgace

After the BMW R nineT-based Impostor debuted on EXIF, it soon became known as “the world’s most hated motorcycle.” That actually tickled builder and El Solitario founder David Borras, who enjoys agitating the norms of custom motorcycling. The Impostor is a “Bōsōzoku-Chopper-Racer,” a nod to the most outrageous of all the Japanese moto subcultures, with a chunky 16-inch hoop in the back and a 21-inch front wheel that bolts up to an adjustable BMW S1000RR fork. The most impressively polarizing feature of this bike is its stainless steel, see-through fairing, and tail unit that curve snugly around the boxer cylinders.

“While I’m not a fan of shopping trolley bodywork, you’ve got to hand it to Borras and company: They set out to press the hot button and shake things up,” Hunter says. “It’s just a shame that most folks will remember them for this machine rather than the other — very clever — builds in the El Solitario portfolio.”

“As a piece of art, this bike is an excellent, pointed criticism of everything that is bland in motorcycle culture. As a motorcycle, it is a pretentious abomination that deserves all the mockery it is getting. The perfect Bike EXIF post, in other words.”—Isambard 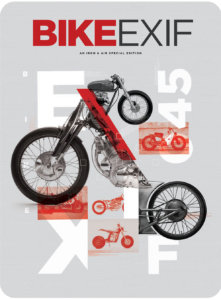