Automobiles You’ve Never Seen an Alfa Romeo GTV Quite Like This BeforeTwo brothers took a banged up 1974 Alfa Romeo 105 GTV and fixed it up to near universal praise.

The AAA truck driver didn’t tell Iliya and Nikita Bridan — 30-year-old twin brothers who both work as automotive designers — that he (allegedly) dropped and ruined their beautiful 1974 Alfa Romeo 105 GTV. The driver loaded the pristine coupe onto his truck, left Nik’s house en route to the boys’ trusted mechanic for a tune-up… and the Alfa showed up at the shop with its rear end caved in, its quarter panels buckled, its engine mounts broken, and its frame bent. The Bridan brothers were devastated, pissed, and absolutely unwilling to accept their Alfa’s fate.

Nik called AAA and said, “Give us the car and a clean title. It’s totaled… You agree, we agree. Just release it to us so we can do whatever we want.” Iliya adds, “We didn’t want to destroy the car because it meant so much to us. We just wanted to keep it and do something. It was a crazy sort of optimism, like, ‘Yeah, we can make it so cool now. We have total freedom.’”

Iliya had been working with a friend on a lifted, safari-ready Porsche 911, and he began wondering what the 105 GTV would look like with all-terrain tires. He shared renderings with Nik, who loved them, and off they went. The resurrection and reinvention took only three weeks; as a Canadian citizen with an expired visa, Nik needed to take time off work and turned into a full-time mechanic. (“We’re designers, not engineers,” says Iliya. “We think engineers are lazy and don’t know shit, and, like, how hard could it be? That’s how designers think.”)

Not surprisingly, there are no companies producing off-road parts for 105 Series Alfas, so the Bridan brothers started assembling a hodgepodge of parts from Broncos, Defenders, and the like. They rendered a roof rack in CAD, then fabbed it up and filled it with NATO jerry cans and a spare. Dialing in the suspension required a lot of patience; the guys had to remove the car’s bump stops and commission a custom set of springs. Iliya and Nik couldn’t find off-road automotive tires small enough for the Alfa’s 14-inch wheels, but they did find a set of side-by-side “buggy” tires that would fit.

“They’re supposedly speed limited to about 65 miles per hour, but we’ve done 75,” confesses Nik. “But somebody forgot to tighten a wheel before the first test drive…” He turns to Iliya, who smirks and says, “I was driving, there was a little bit of a wobble, and I was like, ‘Eh, it’s probably the tires.’ I just remember slamming into the ground, and the driver-side front tire bouncing next to me. It bounced over the median and into oncoming traffic. A couple of cars just missed it, and it ended up on the other side of the street on the sidewalk. I was on three wheels, thinking, ‘Shit, I don’t know what to do… I should probably go collect the tire.’”

We ask what purists think of their creation. “You know, I thought we were cooler,” says Nik. “I thought we were more badass, fucking up an Alfa; everybody’s going to hate us, and it’ll be awesome. It’s actually the opposite — everyone loves it. The only guy who really hates it is Benny, our mechanic. He’s the only guy who’s like, ‘What the hell? You guys ruined an Alfa.’”

But Benny is wrong; this Alfa is back, and even better than used to be, thanks to the overwhelming energy between Iliya and Nikita. The womb-mates dubbed their creation Dropped Alfa, the driest, most appropriate name possible. “We loved it before, but it’s even more fun now,” Nik says. “It’s opened up a new world for us. We’ve always been into canyon driving and doing autocross and track days. Now we go up to Mammoth and find all these roads, or we go on Google Earth and find all these remote places. It’s like, ‘Fuck, that’s awesome — we could go there!’” 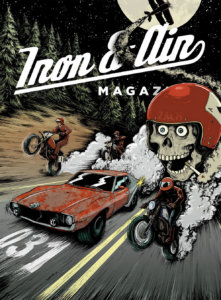 View all Artifacts
The Surprising Way a Burlap Sack Can Save Your Life Desert bags are an ingenious way to quench your thirst when your Life Straw goes MIA. Read Story